Laid In Ashes - Bastards From Hell

After more than 2 years a follow up of their 2003 release "Freakshow 666" sees the light on Perish In Light. Both are from Germany and made a nice step with this album. Laid In Ashes plays a mixture of death and thrash in groovy songs. Guitars are dominant riffing the melodic parts (and now and then a leads comes through) while vocals are changable between a grunt, high or screams. With the combination of groove and melody the songs are easy to listen to. Also good interaction in the tempo separation. Fast parts are combined with mid tempo beats. An album that shows a lot when listening it a few times. 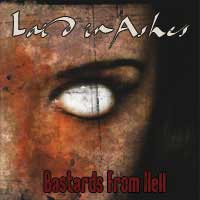 1. Regressus Diaboli
2. Bastards from Hell
3. Hate Brigade
4. Children of Darkness
5. Shot Six Times
6. Gabriel
7. Death of A Vampire
8. Parasite Within
9. Face of Death
10. Visit from the Other Side