Laika are from Canada and part of the growing melodic death metal scene. It’s strange really, as we are hearing about such bands and genres growing so much when in other parts of the world, time has moved on in some respects. So for me, this is a nice reminder of the genre.

The lead break after about 3 mins 30 seconds during ‘Escalation of Terror’ is lost in the mix until it gets right up to the top of the fretboard, which is a shame because if you listen closely, this enables a really cool build up part way through the track, which itself is a lesson in how to produce accurate and powerful melodic death metal, sometimes like earlier Children of Bodom.  ‘Caligae a Galea’ is a strange tune, quite riffy and mobile, the solo that appears first is the keyboard, so the guitar has to wait till the latter part of the tune to be heard. A nice touch, the arrangement is different, will it lead to frustration? Ha, probably. ‘The Immortal’ is a touch more death n roll, or rather momentum about it, with some atmospheric or gothic inspired music in the form of keyboards once again and some light stuff that pleases modern circles of European metal music, it would probably get dragged into the area of Katatonia, maybe some other areas, but for me I couldn’t say who as its not a field of music I am interested in personally.

Essentially, lose the keyboards and you have a pretty damn good sound, although the accompaniment nature of the keys are cool, the stand alone odd note here and there just cause a distraction, that’s what I mean by lose them altogether.  But on the whole, the production is crisp, vibrant and the songs are very much in tune with similar bands within the genre, how it will fair in such a crowded scene such as Europe will remain to be seen. 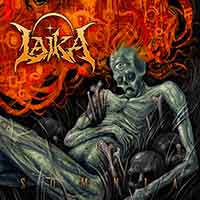 Self released
Band: www.facebook.com/laikaofficial
Reviewer: twansibon
Oct 11, 2014
Next review: The Morningside - Letters From The Empty Towns