Lair Of The Minotaur - Evil Power

Evil Power is thrash-doomsters Lair Of The Minotaur's fourth full length album. With a new label since the leaving of Southern Lord, the band continues in their drudged music by creating an atmosphere that is worthy of doom for being thick and raw but with the speed and catchiness of thrash metal. While their last album seemed a but more sludgy than usual, Evil Power is an 'all balls out' album where the band holds nothing back. "Attack The Gods" is a metal declaration unto itself where Lair Of The Minotaur wastes no time in laying down the riffs and barking the vocals. The speed isn't overly crushing, but it has the bite that is as nasty as the recent Slayer album. Some tracks like "Evil Power" are a bit thicker in sound due to the bass and how the guitars just chug together rather than hack of their riffs individually and more melodically. In contrast "Goatstorm" is the most intense track on the album, almost border black metal with how razor sharp and grinding the riffs are. The vocals even seem to have gotten more black metal-ish with their howling versus the usual grating, doom vocals the band was use to using. It almost makes them seem more metalcore on the faster songs.

Of course, for the most part, Lair Of The Minotaur is still crunching doom. "Blood From The Witch's Vein" is as old school rock n' doom as it gets, with an injection of punk to go along with it. "We Are Hades" keeps up with that 'hades' title trend between albums, and offers a catchy, brutal beating to the earhole. It's a very raw, very grimy track that sounds like melodic sludgecore. Similarily, the closer "The Violent Iron Age Of Man" keeps a thick, distorted sound and also leaves it dirty in the sense of production so the guitars don't sound so clean, but it retains the sound that early Black Sabbath had (not including the snarled vocals.)

While this isn't War Metal..., Evil Power is still sure to please most Lair Of The Minotaur fans. It is not epic; many of the songs are short, so don't expect any fancy High On Fire stuff or something similar to Gates Of Slumber. Lair Of The Minotaur do best at delivering fast, brief musical assaults that are gritty and catchy, and it is obvious that they have not lost their touch... only gotten maybe slightly cleaner. 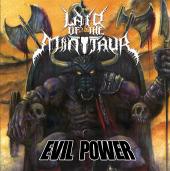 The Grind-House Records
Reviewer: Colin McNamara
Jun 5, 2010
Next review: Fuck Your Shadow From Behind - Freigeist