The Minotaur is a figure from the ancient Greek mythology and it symbols half man half bull. But this trio hails not from Greece but from Chicago in the US. With "War Metal Battle Master" they recorded and released their third album. The influences from Lair Of The Minotaur is not going back to the Greek mythology but more to bands like Venom, Celtic Frost or Bathory. Thrash tunes that take the bull by the horns and played with a great dose of aggression. Nice hacking drums, guitars that are active in a diversity of melody licks but don't play real thrashy leads and that is fucking pity. The vocalist is sounding like a mean person and sometimes he is not only siging the thrash lines but also like a hardcore vocalist. "War Metal Battle Master" is a fun album to listen to have a good time but don't expect something special. 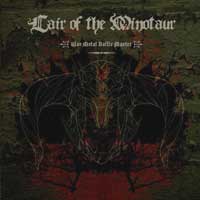