Lake Of Tears - Moons and Mushrooms

New opus from Swedish metalers Lake Of Tears, and the 3rd record I have had the privlage of listening too. Like any band who push themselves they evolve in there sound. The 1st record I was exposed to was Greatest Tears vol II, which was more of a death metal sounding record. Then the band progressed to more of a Gothic sound with Black Brick Road. And have even further pushed there envelope with Moons and Mushrooms. Lake Of Tears have begun to create more of an atmosphere with there music, incorrperating more etheral and sythetic sounds coiled in there primary instruments. A nice touch to the record is the musicianship which has progessed a great deal naturaly. This marks as a landmark album for Lake Of Tears not only in sound, but in personal triumph, Im quite sure this is the record they always wanted to make. For fans of Tiamat, Paradise Lost, and Amorphis. 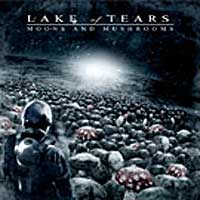 1. Last Purple Sky
2. Island Earth
3. You Better Breathe While There's Still Air
4. Waiting Counting
5. Like A Leaf
6. Children Of The Grey
7. Head On Phantom
8. Planet Of The Penguins
9. Is There A Better Way