This is more modern Dutch death metal, with two initial slow burning and often groovy tracks, akin to some of the late 90’s metal, mixed with death metal. Then you have the final two tracks that pick up the pace and engage you more into the feeling of listening to death metal, albeit again, a touch more modern. That said, to be recorded by the band themselves, the sound is pretty good actually. There’s a few tone/tuning notables for the snare drum occasionally, but nothing that’s going to make you dislike the music, it just sounds a touch weaker than the rest of the instruments.

For what this debut release is, it works, but I don’t find anything that really raises the bar higher than another of those listenable releases, it is not that distinctive. That said, it isn’t bad either. 'Annihilation' stands out though for me, the pace, the energy is cool with some nasty vocals. Rather than going overboard in the riff department, LaMorta tend to use time changes and grooves to vary their songs (apart from section of 'Extinction'), often going slower like ‘I Declare War’ which has  little compression and allows the chords to breath more into a more organic experience. Overall, not a bad start to their recording career. 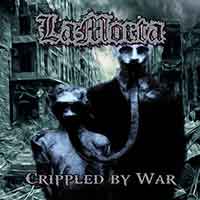