Time again for the Dutch masters of gore, Last Days Of Humanity, to run a new split cd (second this year after the one with F.U.B.A.R.), this time with the German goregrinders baring the heavy name, Satan's Revenge On Mankind. Before we start with this split cd I have to state that this is a release strictly for the fans of the genre. Don't let me catch any Stratovarious fans peeking in here. Not for you fellas. This is for the ones with chronic and severe, ear drum trauma. Myself included. So let's cut the crap and get to the chase.

LDOH have never actually led any of their fans down I think. Tons of releases and their musical identity remains the same. Heavy sounding guitars with the bass loud enough to reach the point of exaggeration, with the gain in the distortion level permanently to the red zone. Drum patterns hardly ever skip blast beats. Only in some bits here and there but mostly it is blastbeating till there's no skin left. The vocals are the typical LDOH growling-pitch shifted style, covering the entire range of tracks so small in length that do not become tiresome at all. 8 tracks is their share to this split. 8 tracks in something like 8 minutes so you go on and do the math. You're already a LDOH fan, you shouldn't need more blabbering to be convinced. If you are not, but into goregrind, just keep in mind that these bastards here defined the term and this is I'd say one of the bands that after all those years still manage stay in shape.

Now I have to admit that the Germans I had no idea of. But their name alone is able to drag attention. Their aspect on goregrind regarding length is way different than LDOH. 2 songs in 9 minutes proves my saying. Their approach is different. One could say that SROM mix their goregrind with large doses of sludge. Starting slow with a sample bringing old horror movies in mind, their  tracks proceed slow. But their music is heavier than a bulldozer. Three vocalists here so you can listen to the gore-grind haul interrupted by growls and screams here and there, mostly in their more doom-ish moments. Their long tracks consist of many sludgy moments altering of course with rabid blast beats, but all based under a concept. Samples are present almost through the entire song making the tracks pleasant to listen to.  SROM give another dimension to goregrind. They kind of bring a horror aura to the entire 8 minutes of their presence to this split.

Production notes are not necessary I believe. Rotten and shitty as it should be. Splatter meets Horror for this exquisite piece of goregrind. A definite MUST for the fans of the genre. 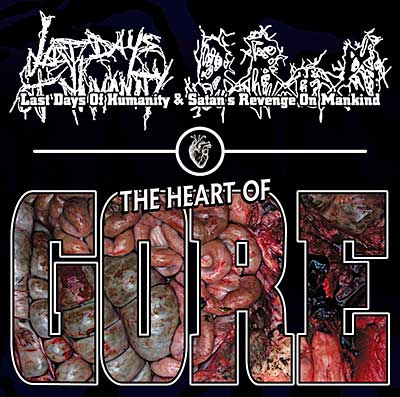