Last Mile is a hardcore band formed in December 2007 to play hardcore for the love of playing hardcore. According to this statement we are not dealing with some amateurs but 4 guys with a passion for hardcore. And when you know that the founding member is Jacob Bredahl who is ofcourse known from Hatebreed or Barcode, the passion is there. The bassist Lennart played in Stomped and vocalist Laurits terrorist with As We Fight so enough of experiences.

Therefor it is an album that is energetic, aggressive with catchy hooks and shout along chorusses. Although the vocals are a bit to high I would like to hear him a bit lower shouting. Tempo goes up but have enough moshing breakdowns to get the variety. What you don't find on this album are songs that are experimental or barrier breaking and when you expect that your nose will be broken too.

With this debut album these Danish guys recorded a decent album with enough songs that make a circle pit like my fav track "No Holding Back". 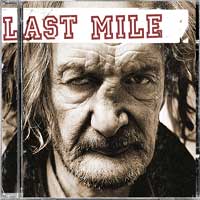