This Portuguese band play traditional metal in the vein of mid period Iron Maiden, and general British/European traditional metal of that mid-80’s era as there are plenty of galloping rhythms and bouts of metal glory in plentiful supply, which is particularly prevalent on ‘(Heavy Metal) A Nossa Bandeira’. The opening tune ‘Committed to Metal’ sounds like the band playing with their heart on their studded arm band clad sleeves with many pointers to popular 80’s traditional metal. The vocals are strong (this release was recorded with the bands original singer Xico Steele – now there is a new line up for their forthcoming release) and they have their own character, there are no sound-a-likes happening, so it’s quite refreshing to hear this. Sing along with ‘Synn is Ynn’ and rock out with the lighter sounding ‘Time to Fight’, but before you know it unfortunately the EP is over as quickly as it begins.

The bands persona, artwork and song titles leave nothing to the imagination, you are going full force into a true heavy metal storm with this release with the artwork is a little cheeky, but it gets the message across. Looking for real metal for real metal fans, then this is for you. This is a living it for real, weekend warriors walk on by. Leather Synn is a metal fist raising experience dedicated to a pretty special period of music. 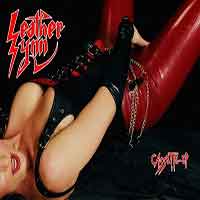