Legions Of War - Forced To The Ground

This band has proved to be a bit of an enigma the more times I have spun this release. On the surface, this Swedish band is very aggressive and reminiscent of some of Kreator’s material, but then on the other hand they go down a much more blackened path (mainly in the chords and their progressions). This album, only their second full length effort since forming some twelve years ago, is  quite to the point and would not find disagreement with fans of the black thrash coming out of South America or Australia over recent times (those comparisons have already been laid down many times before) but of the most redeeming tracks on this release is the epic ‘Grandiose Visions’. This is a tune that has tremendous neck wrenching rhythm, with a dual style vocal that is both blackened but also thrash styled with some remarkably similar phrasing of lyrics like Kreator’s Mille Petrozza. The guitar solo, the first one is rather melodic, the tone is very much buried within your mind whilst the next section gives the tunes an epic stance, before reverting back to the heads down infection that started it all, even towards some more straight metal in the second solo that comes out. Again, this is where the feeling of atmosphere comes from for me.

‘Pile of Corpses’ has more black metal to it at its start before becoming very Teutonic, but still a lot like the material that appeared on albums such as ‘Violent Revolution’ and ‘Follow the Reaper’ (yes Children of Bodom and Kreator). The melodic death thrash mixed with a real raspy vocal that is very much consistent throughout the album. For this this wasn’t an instant hit, I had to pick out the similarities to other bands and then think logically about what is arranged here. I like this for what it is, I would have liked a little variation the vocal tone, but what is here is blackened thrash with a big war theme to it, as if the cool artwork wasn’t a big clue in the first place. The glue between the raspy aggression and melody from some of the guitar sections is something that sounds masterful and it all sounds promising for future releases, but based on the music alone I should stipulate. 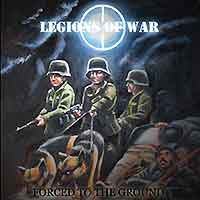