Leo Biollo is one man performing every instrument on his solo album, "From The Depths Of Hell To The Gates Of Heaven". He isn't exactly a guitar legend in the sense he hasn't been a part of any major Canadian bands of metal fame, but his debut is more than solid. Early 80s thrash fans will love this as it has the old-school gritty sound that albums like Metallica's "Kill 'Em All" had. Leo himself rasps away in a gruff snarl that sounds like James Hetfield, and at times can pull off some higher pitches akin to King Diamond. Not a bad vocalist at all. As he weaves his musical story the listener is taken on a concept story about a journey through Hell all the way to Heaven. It isn't as epic as Dante's Inferno but it still is very entertaining.

Lots of the album is done in the thrash metal vein. Songs like "Demonic Abduction" and "The Depths Of Hell" are lightning quick with some razor sharp riffs to match the razored vocals. Sometimes Leo layers his vocals between a snarl and growl to really create a demonic effect. Riffs sound straight out of the 80s thrash scene mixed with some good melodic solos backed with some decent beats from the drums. Other tracks like "The Sage" sound extremely Metallica inspired mixed with progressive solos. There's even some monk like chanting on the album to reflect the title. Leo's voice sounds a little worn throughout the song, but he proves otherwise in the way he screams at the end.

There's the more progressive tracks as well. "Desire To Rise" has a very melodic introduction and a solo that sounds like it has some keyboard along with it. It is a welcome addition to the rest of the thrashiness of the other music, and one could almost say there is a little Opeth influence in the mix. The great eleven minute "Gates Of Heaven" is the most prog metal influenced track on the album. Leo mixes things up with some spoken word passages with his growls before going into a mid paced thrash tone. There's a lot of progressive solos on the song that mirror Dream Theater, but they aren't as schizophrenic. However, Leo does a good job at performing his slow, almost acoustic guitar moments to create a haunting divide between the chaos and beauty of the song. It is a good contrast to the sharper harmonies of the album.

Fans of Iced Earth will see a similarity in Leo's storytelling ability, but "From the Depths..." is nothing close to a copy of Dark Saga or Burnt Offerings. It is its own progressive thrash metal story separate from the rest. For a simple debut, Leo certainly has a lot to offer and fans can only dream of what new stories he will accomplish with future work. For fans of anyone who enjoys epic metal with a good story and good melodies. 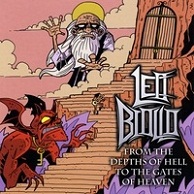