Les Discrets are one of France's more enigmatic shoegaze metal bands. They developed out of the league and collaboration of main man Fursy Teyssier, who partook in Amesoeurs along with fellow shoegaze/ folk metal master, Niege, which was the catalyst for Les Discret's current sound. Although Teyssier had another band, Phest, he wanted Les Discrets to be more of an artistic project. After Phest fell apart, Les Discrets was at his full attention, and through his work with Niege and Amesoeurs, it seems like he finally found a a pattern for the debut album's sound. Like Amesoeur's, there's a black metal feeling to how the guitars buzz with cold, icy riffs, with the drums adding an extra windy chill. But, also mixed up on the album is harmonic melodies and soft, soaring vocals that echo, like a lost soul caught in the storm. Altogether, there's a weight the follows the listener throughout the journey, but it's a pleasant weight that is matched by the 'shoegaze' aspects of Les Discrets' music.

Many of the tracks on Septembre et ses dernières Pensées features a stylistic black metal art on tracks such as "L' Echappee'" and "Les Feuilles de L'olivier." The distorted guitars and drums create a heavily mystical atmosphere that is heard on bands such as Verhern: it's a rushing soundscape that would be a sonic mix of boredome if it wasn't for Teyssier's soft vocals that add the folk/ shoegaze elements to it. As a result, this mix of harsh metal and calming vocals create a very interesting dream world that listeners can really sink into. Les Discrets is all about creating different atmospheres though, rather than just the same droning track over and over. "Song For The Mountains" forsakes the wintery black metal style and brings up more ambiant waves of music. The guitars involve more picked strings rather than strumming and the crashing cymbals can actually be heard.

"Sur Les Quais" is a heavily acoustic track that features a more serene folk atmosphere, and along with the echoing vocals makes it feel like an song by Agalloch. The title track has a more progressive structure that isn't as ambiant or dream-like; it comes together as a full song that is much more complex and similar to Teyssier's work with Amesoeur's. The drums are thicker and don't just involve the cymbals while the guitars are a bit faster, but still have that acoustic pace. Vocals are more layered and sound like a choir rather than just one person. "Svipdgar & Freyja" mixes aggression with a more melodic outro. It starts out heavy with crunching guitars, much like a Novembers Doom album, and then slowly fades out to a lengthy, crawling acoustic with ambiant keyboards in the background. Once again, the dreamscape is created and fans are taken away all over again as it leads into "Une Matine'e d' Hiver" which is just beautifully arranged as it slowly drags along before erupting into a more upbeat tune that sounds more classical and peaceful, like a sure sense of resolvement. All the other tracks are more melancholic and depressing; this one actually inspires some hope.

And overall, this entire album will inspire hope for those who are seeking music that is dynamic and original, with the ability to instill energy and also take it away. The slower passages are extremely ambiant and relaxing, while the heavier stuff is like wandering around in a fog. It's hard to make anything out clearly except for the vocals, which are the entire guiding light throughout this album. Les Discretes really gives for an artistic take on atmospheric metal without copying any other band, despite possible sound influences. It drips of Amesoeurs and Agalloch, but doesn't sound exactly like them. The way the guitars are used is different, and the vocals have a different tone. There's black metal atmosphere, but it isn't black metal. Instead, one could call this 'intense atmospheric shoegaze,' borderlining metal, but not exactly there. It sits on its own, alone and unique. 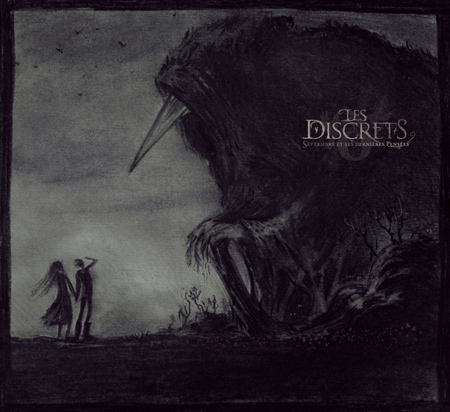