This is a ferocious anarcho grindcore project brought to life by Matthew Widener (Cretin, Citizen). Liberteer are bandied as the ‘soundtrack to the populace casting off the chains of state, church and economic oppression’.

The 17 tracks on the album are all short, ranging from 30 seconds to 3 and a half minutes long. The songs run through into each other, so there is no real stop in the album. The vocals are growly and deep, and can be understood. The instrumental is fast, hard and sharp, with the squeal of the guitar making itself known amongst the clash of cymbals as the album progresses.

This is completely different from anything I’ve heard recently, and this debut from the one man band of Matthew works surprisingly well. The genre chops and changes, from the darker and harder to the lighter and more epic, and it’s nice to hear innovation instead of repetition.  There’s not much I can say about this album, except the disjointed ordering suits the genre being worked in perfectly. This needs to be heard to be believed. 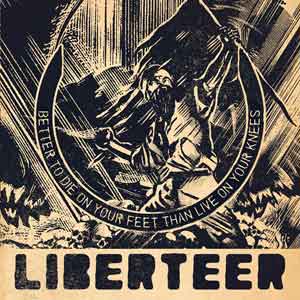