Ok, so here we are again, in the shitty position of trying to discover what's the bugger, in something that on the first place seemed to be a great and fun album to listen to. Macabre Demise is an one man band from Landshut, Bavaria, and I don't know about you, but I really admire people like mr Rieger here, that write, compose and record everything on their own. "Stench Of Death", is  the first full length of Macabre Demise and released in 2011, a bit old but better late than never! So what we have here, is a brutal death metal release of 10 songs, fully inspired by Morbid Angel, Immolation, and other death metal beasts of this kind! So you can imagine that, what you will have to confront, when you start listening to this, is swirling riffs upon raging drums, technical and brutal as they should be! Of course the package of brutal vocals along with the heavy sounding guitars and the fast bass is something you can't consider loosing when you are talking about death metal of this type. So what can go wrong when listening to a death metal album that has a tick on each of the upper categories?

But of course the exaggeration in technicality and the repetition! And in this case exaggeration is not a problem cos Macabre Demise, seem to have a pretty nice balance between technicality and the groove of the songs, what they seem to have lost, and by 'they' I mean mr Rieger, is the sense of repetition and the ways to diminish this aspect by adding smart riffs here and there that would smoothen up the songs and make them feel less equal one with the other. In fact this is a trap many great bands have fallen, and it is an easy one to bite. The technical level of "Stench Of Death" is really high, and of course the production and all that are in an equal level. It's just that after the first two songs, it kind of feels like you are listening to the same song, so I guess what Macabre Demise's first full length is missing, is those riffs here and there, that would make the difference. Riffs that would not get lost under the sheer power of a blastbeat, or the relentless growling of the vocalist, the result of this lack of prestigious riffs is that you can't let yourself fall for this one. Once you take your attention away, you feel kind of lost. Of course this is not something to blacken out an entire album "Stench Of Death" is a swarm of brutality, and trust me Macabre Demise's aspect in brutality, will not leave anyone untouched, this first full length is what many would call, a hope breeder. As I checked in their personal webpage, they are into unleashing their second full anytime now, so those who are unaware of what those ravagers from Bavaria sound like, hurry up and check "Stench Of Death". Definitely not an album to change your thoughts and beliefs around death metal, but certainly an album to make you look upon in a positive way, hoping that their second full will take away whatever this creep has left of you. 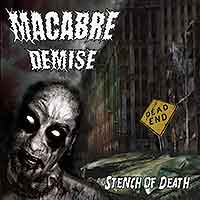