Legendary thrash masters Destruction are currently laying waste to North America with Brazil’s Krisiun and new thrashers Mantic Ritual. With a line up like that it is complete blasphemy to miss the show.

Opening up the night was Pittsburgh’s Mantic Ritual (formerly Meltdown). These guys may be young, but they play like the pros. Pure no frills thrash metal. There songs are exactly what any thrash fan wants, blistering speed, thunderous drums and leads that make your ears bleed and your fists pump. These guys fit the bill perfectly starting off the night right. For any thrash fans, I highly recommend getting their disk, “Executioner”.

Mantic Ritual’s set list was as follows:
One by One
Murdered to Death
Black Metal (Venom cover)
Souls
Panic
Thrash Atonement
Next Attack

Next up on the bill was Krisiun. These guys don’t mess around when it comes to death metal, its loud, fast and evil. The three brothers took the stage and lay waste to the crowd. The drummer has some of the fastest blasts in metal, and though there is only one guitar, his riffs and solos fill the shoes of three men. Though Krisiun has tons of material to choose from, and a newer album to still promote, most of their songs came off their last release Assassination, and only two songs off their newest record, Southern Storm. It was unfortunate that they didn’t go deep into their catalog and play some older favorites, but regardless their set was top notch.

Closing the night was the German thrash veterans Destruction. As always these guys have one goal, to make the crowd bang their heads until their necks can’t take it anymore. They had a great mix of new and old songs in their set, they played with tons of energy and kept the crowd involved. Schmier had three mic stands and used them all, moving around the stage during songs, which allowed better views of the band for everyone. The band sounded great from entire room, and only had minor troubles with loss of guitar about 3/4 ‘s through their set.

Given this solid line up of great bands, mixed with the show being on a Friday, it gets an easy 4/5. A little more people in the crowd would have made this show better, but regardless it’s not often that Destruction comes to town, so catch this tour before it’s over! 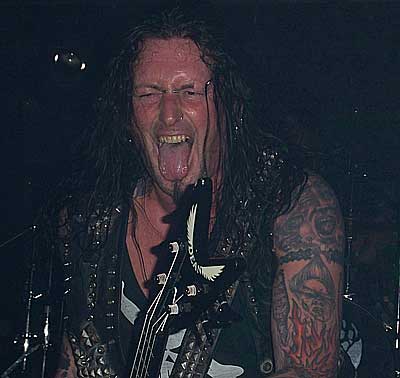