Maximum Perversion/Ebolie - Fuck Ya Ears And Drink Ya Beers

Maximum Perversion and Ebolie, both of Australian origin, have released a split-CD on Grindhead Records called FUCK YA EARS AND DRINK YA BEERS. And a fine split it is. Each band opens their part of the split with a segment of the title. For example, Maximum Perversion opens with “Fuck Ya Ears” while Ebolie opens their portion with “Drink Ya Beers.” On first glance, one might think this is funny. And it is in a way because of all the cool gross quotes the bands include as track openers dubbed in before their music begins. These quotes are sick and damn amusing. But the music itself, both bands, is right up there with the highest quality brutal death bands. Great powerful drumming, stops and starts, proper guitar riffing.

Maximum Perversion’s qualities are all recorded in a way hat allows the elements to be heard from the surface. There is no low dark sounds (besides the sounds themselves) buried under low mixing techniques. Ebolie is more of the low mixed variety. Not by much I tell you, but by a tad. Ebolie’s sound is overall as brutal as Maximum Perversion but rumbles in the speakers more than Maxi P. Plus Ebolie adds some neat lighter elements of musicianship at the beginning of tracks, flourishes of string dragging, clean picking, and arpeggios.

I am not taking a side in this split-CD. Maximum Perversion and Ebolie both engage high production value and draw their song lengths out to just the perfect amount to fuck our ears. 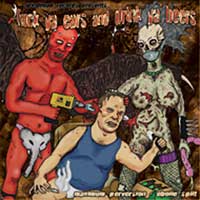