Another split release of No Escape Records. This time Meatyard from New Zealand and Maggots from Holland. Meatyard kicks off with 6 tracks on their first official release in their 10 years of existence. Is this negative or positive? Both. They play old school gore deathgrind in a very nice way but it is nothing new. The songs are oke but they miss some exciting hook. Which make my head turn when playing. Meatyard is oke and their upcoming full length will be oke but one in the dozen. Maggots unleash 10 tracks of pure fury. These songs are taking from their 2005 promo and show potential rotting. Furious and ferocity speed with catchy grooves. Combing grind with thrash in well oiled machine. Good split release for the grinders among us. 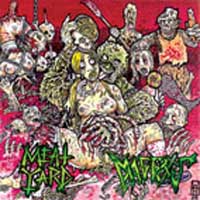