This is the first release from Melechesh originally released in 1996 but now released as a digipack with two bonus tracks and a CDROM track. When you know their second hymn Djinn you know what to expect only more primitive. Melechesh plays BM with influences from the old stories of Mesopotamia. Technical furious BM with a lot af variety in the songstructure. Like the Djinn album a would have album. 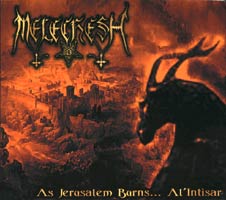