Nolentia are a three piece death grindcore band with plenty of technicality and raw musical ability to make their debut album noticeable. As expected, the music is heavily drum focused but there is a lot of technical guitar work as well. Vocals are bellowed or shrieked but it is the drums that are really stealing the show. Some tracks like "Oyster" and "Snowball Fight" stand true to the grindcore formula with the breakdowns and extreme drumming, but within these songs there's a lot of rock inspired riffs that chug along beside the drums and change the pace of the music from just being obliterating to something with some actual rhythm. "Do I" has a really good technical guitar line that sounds more like something that came from the Red Hot Chili Peppers, but doesn't destroy the grindcore feeling of the rest of the song.

Sadly, some songs ARE destroyed by the grindcore feeling due to being so heavy and extreme that it just becomes too much to handle, such as "Plurality Of Self." Everything is thrown at the listener at once and just becomes monotonous. However, there is a rare time when this does work due to the contrasting nature of "Destruct" and "Construct", "Destruct" naturally being the extreme obliteration of music and "Construct" being much slower, more doom technical grindcore. This is a rare occasion though, as most of the songs here on Nolentia's debut are mid paced grindcore rockers. Everything sadly sounds the same. There's some moments where the introduction of a song like "Human Beta Release" shows promise that Nolentia may do something more technical and groovy than just screaming and banging away at the drum kit with the guitars, but eventually everything falls back into the dirty grind formula. Fortunately, scattered throughout the songs, there's a whiff of a slap bass line or a guitar solo that doesn't sound so piercing or like everything that's been already heard.

As expected for a grindcore album, Nolentia's debut is short, but good things come in small doses. The music here should appease fans of deathcore, grindcore, technical death metal, or anyone who likes fast, gritty music that doesn't just rely on speed to make it good. Each song may sound the same but there's bits and pieces such as a certain riff or drum style that makes it different than the last, creating something much more creative than just an average grindcore death metal album. It would be nice on future work to see the band have a much more recognizable bass sound amongst the extreme drumming, but as long as they don't lose their technicality or the ability to keep from being monotonous they should become a proud act in the metal genre all around. 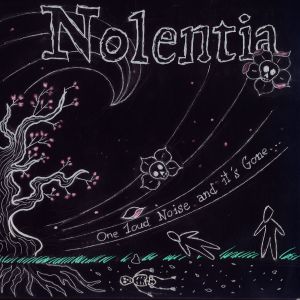