Nothing Sacred - No Gods

It is a little surprising when bands from the 80s put out an album, disappear for the longest time, and then suddenly appear back in the world like nothing happened. Almost like they were frozen in time for it. Ultimately, Nothing Sacred were an Australian active from 1983 all the way to 1993 before disappearing and then reactivating in 2015, but only doing one album in 88. Now, well over 20 years later, we have a new offering from them with a fresh sound and hopefully a return to a classic form. “No Gods” is certainly a different take compared to “Let Us Prey,”- the group’s debut. The debut was raw, speedy and thrashy with that classic Judas Priest meets Metallica vibe. Now, the modern Nothing Sacred is certainly still thrashy, but more polished and slowed down quite a bit. The speed metal riffs are gone and replaced by mid paced to slow chuggy riffs with melodic vocals, aiming for more of a classic heavy metal style akin to artists like Ozzy Osbourne. Tracks like ‘Final Crime’ and ‘First World Problems’ have that mix of mid era Slayer sound meets groove metal like Lamb of God riffs and pace. It can be repetitive, but very accessible. The whole album is quite accessible.

The only downside is that the lack of ferocity compared to the first album might make some fans feels they went soft, much in the way that someone might compare older Metallica albums like “… and Justice for All” to an album like “Hardwired…” While some wish the time capsule would spit out right where Nothing Sacred left off, the clearer sounding slowed down style sounds better than the old. The biting lyrics of a track like ‘False Prophets’ may not hit as hard sonically with the riffs, despite a hell of a lot of groove, compared to how it might just charge out of the gates on their debut, but it still hits hard. And not everything on the album is slow. Tracks like ‘Cult’ pick things up a bit. The pace isn’t much faster but there is a thicker sound built by the guitars and bass. Those looking for solos that hit hard will enjoy ‘Oracle.’ And then those who want more of a groove, almost alt rock touch akin to a group like Alice in Chains will find the drawn out ‘Stoner’ quite a treat, but also the biggest anomaly on the album.

Those looking for a blast from the past with Nothing Sacred won’t find it here. Time has changed them far too much. The core sound of thrash mixed with heavy metal it still there, but it is like trying to see Black Sabbath in Ozzy Osbourne. Nothing Sacred have stepped into a new light but it isn’t so bad. True, the explosive fire of a track like ‘Warheads’ isn’t there, but for anyone who is fresh to the sound of metal and feels that groups like Megadeth, Slipknot, or Soulfly are far too cliché or modern things to start with, sometimes a random band is a nice way to get introduced. “No Gods” is full of dark, yet energetic riffs with a vocal style that is easy to understand yet doesn’t sound whiny or too dramatically sorrowful. There’s attitude to the album, but not as much fans of heavier thrash or punk might enjoy. It is a precarious balance that will either alienate old fans or draw in a lot of new ones, and Nothing Sacred seem to have done a good enough job to retain both. 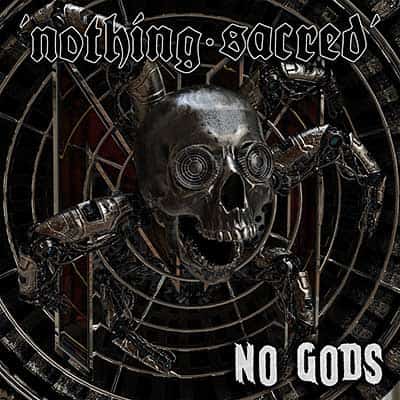