Obituary - Cause Of Death

Looking to hear some exploding, mind boggling, ear piercing, highly original an unable to top kind of death metal? Well "Cause of Death" was created and reflects that kind of vibe within itself. It is so traumatizing especially the vocals by John Tardy, talk about the sound of death!!! Well, great lineup especially who's hitting the lead guitar work but nonetheless the immortal James Murphy. Clocking in some brutal, distorted rhythm work with chords galore and speeds slow, but daunting, Trevor Peres is in charge. Donald Tardy hits behind the set with precision and mortification.

An album ahead of it's time, a time when the Floridian death metal scene was reaching its highest...Obituary makes a mark in the scene so highly and with utmost originality as well as a sort of "best 'of" compilation of songs that can only be replicated by the band. While to me it does sound like a compilation album, but really is a full length brutal release that features guitar chords chunky and thick with an atmospheric death rattle to it. James Murphy raids the lead department and yet again sparks with utter intensity featuring leads that are fully compliant on the fretboard the same way he hit "Spiritual Healing" by Death.

Musicianship at it's highest, with John Tardy spewing forth death, gore, etc. type of lyrics, rhythms that are marked well with that intensity, leads fitting the atmosphere perfectly, and a production perfected by Scott Burns. He seemed to top death metal recorders in the production department at the time where these original sounding death metal bands were producing sounds that are so captivating and skull wrenching. The overall aura on here was not only the vocals, rhythms, leads and drums, but the whole atmosphere featuring deathly sounding music ever put forth onto the scene.

Yes, they did have many competitors playing death metal such as bands like Death, Pestilence, Cannibal Corpse, et al and yet at that time they seemed to be amongst the great musicians playing this kind of metal. However, lyrical concepts are what they are on here and it suits the music. That thick, grinding, choppy and tremolo picked rhythms were well thought out and James Murphy ripping out that talent that he bestowed on lead guitar. Such a great musician that has succumbed the possibly life threatening brain cancer the same way that Chuck Schuldiner did. Murphy seems to be in pretty bad shape nowadays and hopefully the Sweet Relief Foundation find funds to save him.

Get the remastered edition of "Cause of Death", it features bonus demo tracks and augmented, atmospheric and damn bloody good cast of musicians with one of the top producer at the time. The music, the band, the era and the augmented scene of deathly dying of metal depicted. This album to me remains amongst the top albums in the genre of death metal ever recorded. It is my view at least, having been into death metal for over 23 years, trust me I know as picky as I am with albums this one is top notch. If you choose to own it, have it ASAP because of its utter brain wrenching death metal ever heard. Obituary's finest here on this recording. 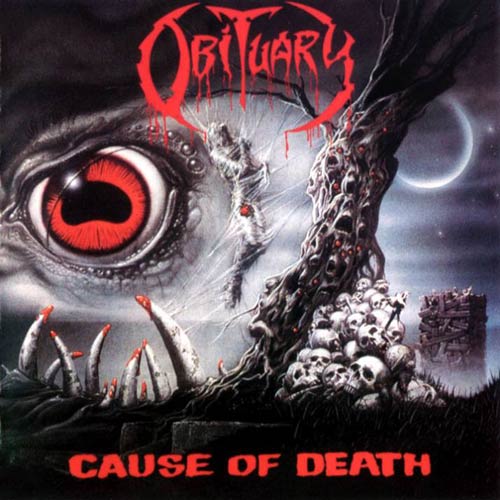