Obituary needs no introduction. You all know they are one of the pioneers of the Florida death metal scene and one of death metal’s cornerstone bands. While wrapping up the last bit of touring on their massively successful latest album “Inked In Blood” the band have released this nice little tie over package. “Ten Thousand Ways To Die” is a live album with two new studio tracks.

The two studio tracks are both ok neither essential nor offensive. 'Loathe' is a 6 minute slow doomy number while 'Ten Thousand Ways To Die' is a fast with an almost punk edge to it. New tracks on live albums are nothing new, however normally they are thrown on at the end. They don’t normally open the album but whatever; here they are a nice little bonus nothing more. The real treat here is the live material. From track 3 onwards we get a dozen prime cuts from the bands catalogue. Similar to the set they played when they toured with Carcass and Napalm Death. Opening with the awesome groove of 'Redneck Stomp' the instrumental which opened the bands return album “Frozen In Time”. We then get two cuts from” Inked In Blood” 'Centuries Of lies' and 'Visions In My Head' both sound fantastic and show how much the bands new material stands alongside their classic songs. The rest of the album plays like a “Best Of” set leaning heavily on their first three albums. A real gem is when 'Don’t Care' comes seemingly out of nowhere but all the classics are here whichever your favorite from 'Find The Arise' to 'Chopped In Half' this is a fantastic live album, it’s fun it’s banging and the perfect stocking filler for a BRUTALISM reader.

I realized as a youngster that John Carpenter was my favorite film maker because I unknowingly collected his films on video. I didn’t actually realize at the time of collecting who he actually was. It’s the same thing here with Obituary. I never labeled them as one of my favorite bands or any of their albums “Album Of The Year” or anything like that but I realized while listening to this CD, the amount of memories some of these songs brought back I realized Obituary are one of the bands I have been listening to since I was a teenager. I didn’t even like them to begin with! But they have always one way or another been there in the background. I collected all their albums over the years and since “Frozen In Time” I have bought all their albums on the day of release without fail but also without really thinking of it. I never thought of Obituary as one of my favorite bands. While listening to this album I realized they are. 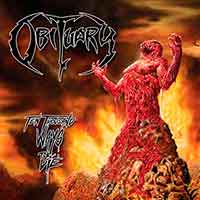