Hailed the world over as one of death metal’s best exponents on the live gigging scene, OBITUARY return with a strikingly good album Xecutioner’s Return.

Ok, OBITUARY nowadays is nothing new under the sun, but if the album title is anything to go by, then hell yeah if OBITUARY is striking a good chord here. From the down-tuned guitar with its tone distinctive only of OBITUARY from the days when the band were known as XECUTIONER to the return of awesome solo guitars never replaced since James Murphy on Cause of Death, the Floridians stop at nothing!!!! Known already for their old school riffs that interlock as if by fate with the simple yet uplifting enough drumming to get a whole mosh pit go tribal, this time around OBITUARY return with Ralph Santolla, ex-worker at Morrisound Studios, guitar teacher to NOCTURNUS’ Mike Davis, and studio/live performer to the likes of SEBASTIAN BACH down to ICED EARTH, DEATH & his latest before OBITUARY, that being DEICIDE. So goes without saying that this album here reeks of good….. what am I saying? These are not just good but stunning solos!

Yet how a band manages to re-unite and get such a buzz going about it once more is a band thing no individual by himself may stand up to. So OBITUARY is OBITUARY, still fronted by the distinct throat of a one Mr. John Tardy who screeches like a banshee misplaced in a male’s body yet backed so strongly by the rest of his Floridian team that give the clearly CELTIC FROST they are inspired by a taste of the burning sun their side of the pond, like a stenched corpse of a rotten bird, that same banshee forewarning of impending death. To quote from their biography “Like a forgotten corpse in the basement,….. fermenting like waste in the hot Florida sun, Obituary return from hiatus with the voracity of a starven wretch. The forfeiture of time brings blessings of brutality, and assurance that the Dead shall indeed rise again.  Such aural abrasion can only be heard on an Obituary album or the live circumcision of a thirty-year-old man, the choice is yours...”

My fave tracks are banging Evil Ways, mosher Drop Dead and solo-ripping Second Chance!!!! Give me the pit, really!!!! 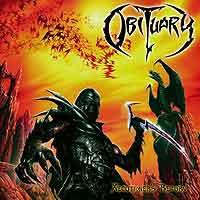