Experimental Grindcore. An outlandish concept that metal fans either embrace for it’s unique ingenuity or reject because it is a slap in the face to traditional Grindcore. Personally I enjoy hearing bands that successfully incorporate multiple influences with traditional Grinder because the sound is extremely heavy. Oblivionized is a band that I feel has done a respectable job keeping their native English Grindcore roots, but adding in a diverse array of metal genres. The album has only three tracks that seem to all connect and focus around the title of the album. The first track, “The Nullification of Philanthropy” starts out with an intense Grindcore build up filled with blazing guitar fills and an intense amount of blast beats. Lead vocalist Zac Broughton has an interesting sounding voice that sounds like the early days of Napalm Death and Bolt Thrower. Also, he trades off vocals with guitarist Sammy Urwin, who has a deeper modern death growl compared to Zac’s grindcore style. I like the trading vocal styles and how their is a variety of sounds not just coming from the instruments. In the beginning track the riffs are gritty and heavy with awesome technicality. Both Geoff Bradley and Sammy Urwin come up with dynamic riffs and fills which reach a great climax during the second track “Cycle of Deprivation.” The drumming is lightening fast, Richard Grindon’s explosive blast beats are a huge plus to this album.

The last track “Nullify the Cycle” caused me to scratch  my head and wonder if there was a mistake with the album because it is drastically different from the other two tracks. The song is extremely mellow compared to the grindcore death metal, but after listening to it for a while I start to enjoy this change in sound. The lyrics are sung clearly instead of growling, which presents some very powerful content that stands out on this three song album.  The album reminds me of certain Melvins albums where the music can be filled with quick heavy riffs and then slow down, but still maintain that dark powerful atmosphere. For only having three songs I am really impressed with Oblivionized’s album “Nullify the Cycle” and enjoy seeing Grindcore mixed with other metal elements that can create a strong album. My only disappointment is that there is only THREE songs. I really want to hear more from this band and three songs is hard to judge their potential. I believe this band can come up with a greater amount of experimental gridcore songs and create a solid in your face metal album. Hopefully Oblivionized comes out with another album soon, so I can hear more music since they seem to like to make short albums! 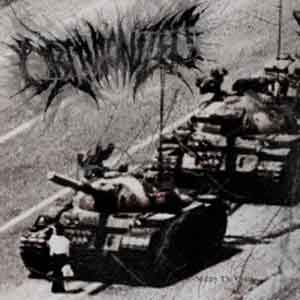