I first was exposed to Germany’s Obscura when seeing them live in late 2013 opening for Death To All the touring Chuck Schuldiner tribute show comprising mainly of ex- Death members and was converted immediately. Frontman and the driving force Steffan Kummerer is a modern incantation of Chuck Schuldiner and Ihsahn. While granted he may not be as original or innovative as those two artists I don’t doubt for a second that either of them wouldn’t be proud to have any of the tracks on this new album out under their own names.

Obscura wear their influences on their sleeves they always have, named after Gorgut’s flagship album if you take later day Death and later day Emperor while adding a massive dollop of Cynic, synthesized vocals and fretless bass and all, although not half as boring!

While it’s pretty obvious from first listen regardless of which album you start with what sound, style etc. Obscura have always done those they look up to justice and over time have put their own stamp on things. One can say while Necrophagist are in what seems to be in permanent slumber Obscura have slipped through and taken over as Germany’s premier progressive death metal band.

Although Steffan was the sole original member for some time, "Arkrosis" a whole new line up and the band haven’t skipped a beat, you really wouldn’t know. Although there isn’t any massive changes or steps in evolution for the band on this release it’s more pressing forward with what they always intended to do. What’s great about this album is that the more you listen to it the more it reveals, the more chaotic it is on the surface the more with each listen it makes sense. Take the second track for instance “The Monist” it has this weird tribal rhythm running through it that constantly loops that’s incredibly catchy. You can’t exactly dance to it but you won’t be to help nodding along with it and the deep guttural vocals over the chorus really shouldn’t match but it does and works brilliantly. As there many instances but on 'Ten Sepiroth' for example there are little gaps where things go a bit spacey and pretty it’s almost like with the whole album you are travelling at lightning speed with all twists and turns, every so often the band stop and admire the view and just before you are too comfortable taking in the beauty they throw you back into the onslaught. The bands space and cosmos lyrical theme suits the music perfectly in that respect. Unless you get the bonus track edition the album closes with a 15 minute epic 'Weltseele'. This shows how far the band has come in terms of songwriting, starting of quiet and builds up; it takes different twists and turns. It’s just spellbinding.

As I said earlier, this album is essentially Obscura doing what they have always done but it is a fantastic addition to their catalogue and it serves both purposes as pleasing current fans while also being a great starting place to new fans. With their growing popularity and the buzz surrounding the album "Arkrosis" by all means should propel them into the big leagues. They can certainly compete with the massively over rated Gojira. While albums like "Human", "Focus", "Epitaph" and the like will never be bettered Obscura are looking to be bigger than those they were influenced by like an apprentice out growing their master, and isn’t that the way it should be… 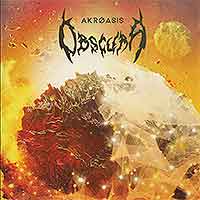