We are greeted with ethereal sounds booming from the speakers upon first listen to this full length from Germany`s Obscure Infinity( not to be confused with the old -school swedish band). That saying Old school death metal is Obscure Infinity`s game here and i must say they do it well. The production is very rough and ready which i feel is very apt for what the band is trying to achieve. Think death metal influences like Carnage/Dismember and Entombed and your close. All instrumentation here sounds very raw though however well executed. It worth mentioning to those reading here that it becomes quite apparent that there are black metal influences lurking in the background here which to be honest im not overly fussed on but ill try not to let that faulter my judgement. But the recording here sure is heavy, really fuckin` heavy at that!

I found that my attention soon started to wonder as the tracks seem to go on forever, some clocking in over the 7 min mark with the riff just repeating over and over with chanting going on over the top of it. Some might get the atmosphere trying to be created but me not being a black metal fan just found it boring. That saying the track, Incinerator really stood out for me but i guess that the  ratio of death metal to black metal was just greater and it has some great blasting moments which really perked up the feel of the album. The track which followed was a stomper which went by the name "In the depths below" which had some great parts. Think Incantation and funerus!  But not as good unfortunately.Everything else just seem to pass me by. To this listener i wish they gave the black metal sections the by ball. That saying not a bad cd which does have some cool parts and if your a fan of black metal give this a listen as perhaps it may bridge a gap of black metal to death metal and open some new doors for you. Though not for this listener sadly. 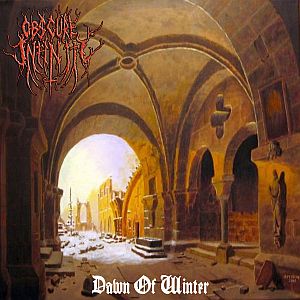 1. Intro - Summoning Of The Ancient Ones
2. Sacrificial Ritual
3. Morbid Ways Of God
4. Foreshadowing Of A Coming Storm
5. Everlasting Fires
6. Incinerator
7. In The Depths Below
8. The Firmament Breathes Eternal Tranquillity
9. Dawn Of Winter
10. Wreak Havoc - A Blackened Mind
11. Transmitting Life To Darkness