My first offering here at BRUTALISM.com comes from Obsidian Sea, a two man doom outfit from of all places, Sofia, Bulgaria.

"Between Two Deserts" is a fairly traditional doom album, and while not groundbreaking, it is well done.

The album contains 9 tracks totaling around 57 minutes. "Between Two Deserts" consists of epic storytelling, well placed spoken word, and a nice balance of crushing riffs, and melodic guitar work. On the downside, the bass seems almost lost in the mix, and I believe this album would have benefited even more with heavier bottom end. I'd also prefer to hear a little less echo effect on the vocals, as it's a bit overdone for my tastes.

The highlights of this release to me are 'Absence Of Faith' which is more uptempo right out of the gate, and needed to help round out the album, 'Impure Days' and the final track, 'Flaming Sword' as both songs weave seamlessly in, and out, from chugging slow riffs to more up tempo, and back again.

All in all, "Between Two Deserts" is a very solid debut effort, and an excellent building block towards something great in the future. I believe Obsidian Sea may have played it a bit safe with their debut, and I'm interested in following their progress to see if they cut loose more, and define their genre, rather than letting the genre define them, the pieces are definitely there. 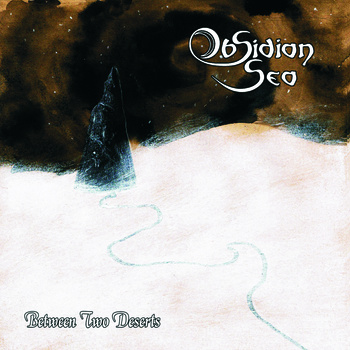 1. At The Temple Doors

5. Curse Of The Watcher