October Falls - A Collapse Of Faith

October Falls originally began as a solo project for mainman Lehto. Since then, it has evolved from an ambient folk metal band to a more doom/ dark ambient metal project, acquiring new members for a bigger, more diverse sound. The band's latest offering, 'A Collapse Of Faith,' is a bit heavier and harsher than the earlier releases which were more acoustic and nature based, but the elements are still present. There is raging guitar chords, acoustic passages, somber piano/ keyboards, and of course... the smell and sound of rain. It seems that at this point Lehto and crew wanted to create the more raging style of nature rather than its folky, peaceful one, and October Falls pulls it off nicely.

"Part I" starts out with crushing waves of guitars and anguished vocals that sound quite a bite like Agalloch. Eventually the music simmers down to an acoustic passage and the backdrop of rain (or static) and eventually picks up into a more melodic rhythm. The folk patterns are still there in how the guitars soar along with the music and the drums take on a bit of a militant march sound. Even the bass can be heard rumbling in the background; thankfully October Falls didn't torch everything in distortion. "Part II" is very similar except there is more melody involved on the guitars, and some very beautiful keybaord passages are also included amongst the more acoustic moments. The whole rain sound is constant throughout the album, and fans may find this a nice touch or a bit repetitive when the band could have used a bit more of something else. Fortunately, the chugging guitar rhythms and somber acoustic moments provide more than enough variation. "Part III" is the rawest, most distorted part of all the music, and also the shortest. While the other two tracks are over ten minutes, "III" is just a sonic, crushing assault on the ear. Sadly the distortion is so high that it blots out much of the other instruments, making the vocals and drums only whispers amongst the guitars.

Overall, this is another strong release for October Falls. Their progression is still present in creating nature based dark metal, but thankfully it isn't the same as their other music or too widely different. Even though it is only three tracks, much of the epic sound is easy to manage without getting too bored or get that feeling that one was cheated out of their time throughout the listen. The vocals are raw and visceral and that makes the lyrics a bit hard to understand, but like with most dark metal, the atmosphere as a whole is what really draws in the listener. The rolling highs of the guitars and lows of the acoustic moments create an excellent balance and it reflects that unbounding power of nature that October Falls dedicates its music to. 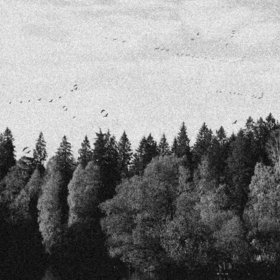