Octopurath – Spawned Beyond The Oneiric Abyss

French Brutality merchants Octopurath set out with their debut EP “Spawned Beyond The Oneiric Abyss” which is 15 minutes of …well brutality!

Octopurath are an odd one I like what they are doing on one hand with tracks like 'I Am The Abominations Slave' with its thundering drums and its groove towards the end. 'The Call Of The Ancients' is also very catchy. The problem with Octopurath is that they often drift in to deathcore/slamcore whatever you call it territory. I really don’t like these new subgenres and don’t like where they are taking death metal because they are the noise that death metal is so often accused of being. While there are some some out moments and some riffs or section do stand out and grab your attention the rest of the EP just melts into itself and just becomes a sticky mess of congealed riffs and blasts. That and the vocalists so often falls into the modern trap of sounding like a hog and it’s just plane annoying.

While the talent is there if they smooth round the edges and put a bit more thought into their song structure and carve out a sound for themselves Octopurath could well be a force to be reckoned with. 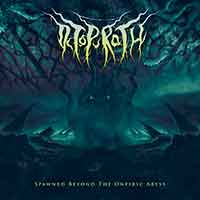