Such a great discovery as this recent Italian brutal band, which has been raging since 2007. What is firstly striking when you listen to "Drowning For Salvation" is the very specific recording which reminds of Brodequin, increasing the rhythmic and vocal modules in their maximum level of aggressiveness, rather putting the emphasis on the drum/bass combo than on the guitar riffs, whose role may consist in giving more depth to the pieces, but not systematically, what strengthens the unexpected nature of the whole album.

'Virgin Woman Cannibalistic Rituals', 'Sins Piercing Impaled Wombs' and 'Drowning For Salvation' are embellished with some perfectly performed guitar solos (the icing on the rotting flesh cake), and we also may notice strong slamming brutal death influences, notably in 'Huma Flesh Dressing', 'Drowning For Salvation', 'Tears Purifying Ways Of Sacrifice', 'Burned Heart Extirpation' and 'Falling To The Cannibal Butchery', sprinkled with extremely heavy, catchy tempos and devastating accelerations; the tone is set right from the first track, soberly called 'Brain Pressure Breaking Skull', which frightening atmosphere is as well inherent in the sick intro as in the predominance of the blast beats, the vocalist’s extremely sepulchral tone complementing the whole lot; the impeccable composition work and inventiveness expended by the band endow the album with an uninterrupted and plentiful savageness which are never subjected to the least skewing, what deserves, as for me, the creditable rate of 4. 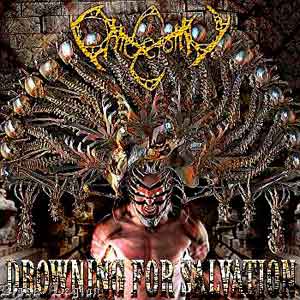