Opera IX has been in the dark for about eight years, so it may be a bit of a surprise to hear that they released a new album out in early 2012. For those who were hoping a return to the form when Cadaveria was on vocals and overall had a much more Gothic Metal tone, think again, as it seems like Opera has delved further and further down the Black Metal path. Still drawing on influences like Emperor, much of the music here is dark, foreboding, and heavy. The opening "Strix" is certainly an atmospheric hook to grab listeners, but don't expect the rest of the album to be like that. Tracks such as "Dead Tree Ballad" set more of the standard for what Opera IX's music has evolved to. Fast, rhythmic tremolo picking layered by keyboards that emulate Cradle Of Filth but don't sound like a direct clone. The vocals are still led by M., but his voice on this album doesn't reach the heights it did on the last release 'Anphisbena,' where he used a nice variety of clean vocals to throw in some folk elements around to make Opera IX more than just a 'Symphonic Black Metal band.' True, there are some clean vocals in the track "Ecate," but they throw more Gothic than Folk elements to the music.

Other tracks like "1313" may throw listeners off as well for the sound, but in a good way. For one, the drums sound a lot more hollow (as they do on a lot of the tracks here) and give of a unique beat, along with the clean piano sound that is a step above just basic synth. The two part "Vox In Rama" offers a more symphonic balance, although the band could have really gone all the way with one part being completely symphonic and then throwing in the Black Metal elements within the second part. Still, the horns and Doom elements of the slower pace really bring out the Gothic funeral elements that make Opera IX once the dark, haunting entity it once was. The closing epic "Historia Nocturna" is perhaps the best track on the album as it includes one of the best drum openings and even more flute/ bagpipes that overshadow the Black Metal elements, rather than be overshadowed by them, and overall just steps things up to a whole new level that fans might be missing up to this point considering Opera IX's history. Overall, this album is a welcome return for the group. It's not perfect, but certainly up to par where they left us off. 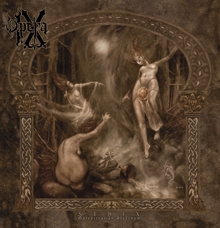