Ophis has been around for some time, and 20 years later they are still producing excellent death doom. Hailing from Germany I remember when I first heard these guys back in 2010 with ‘Withered Shades’ on Solitude Productions Russian doom label, and I’m happy to see them still cranking out solid music. While their sound has changed a little bit, shying away from symphonic elements and going for more of a traditional My Dying Bride meets (beast driven) Draconian and a little bit of Swallow The Sun, the overall result is epic, crushing and engaging with little room to be bored. One thing that Ophis is known for is sticking to 6 tracks or less of music with very long tracks clocking 9 to 14 minutes, so those with a short attention span probably won’t be able to hold their own through the album. But with over an hour of melancholic, crushing doom, anyone who likes slow, plodding doom with death metal echoing vocals will be right at home. Just listen to ‘The Perennial Wound’ and its haunting, beautiful tones with the guitar and vocals will tell one all they need to know about Germany’s Ophis.

Like most epic doom, “Spew Forth Odium” takes a basic formula that has worked for many albums and sticks with it. Like Cannibal Corpse or Draconian, there tends to be little variation between albums here and there, and Ophis doesn’t do much different. This is not a bad thing though, as the formula works very well. Tracks like ‘Deault: Empty’ and ‘Conflagration Eternal’ start out heavy and crushing and then slow down a bit towards the middle, using the percussive thunder of the drums to drive the track along with the vocals, though the melancholy is turned down a bit in trade for driving force of the riffs. The repetitive, yet hammering tone suits the music well, and with the mix of deep growls and shrieking there is plenty of variation here, along with added in spoken word samples. ‘Default: Empty’ features more drawn out melancholy on the chords, but still drives hard emotionally in the Draconian style. ‘Temple Of Scourges’ tries to speed things up but even at mid pace that song drags, but there is a little more life to the music compared to the dead march of some of the other tracks.

The closing ‘Stagnant Room’ ties everything together for a long 13 minutes, but Ophis utilize more vocal variation with spoken word passages and overall bring the best of the doom sub genres to bear with a grandiose end. Overall, a solid fourth full length album for the group and worthy of checking out for anyone who likes melancholic death metal mixed with doom. 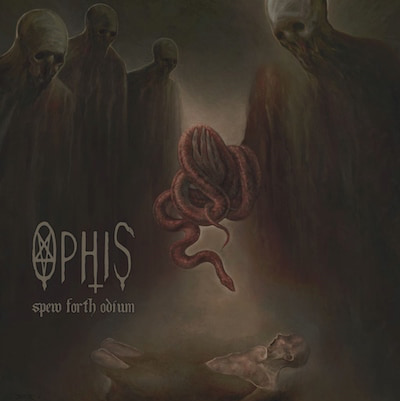