Opprobrium (previously known as Incubus) originally released this debut in 1988, this 2016 re-issue see’s the return of the original artwork, when released under the Incubus moniker, as does the track titles and running order. There is a confusing history with this album, including a re-recorded vocal version that came out in ‘96, this 2016 release is certainly re-mastered and the final 4 tracks of this re-issue includes those from the "Supernatural Death - 1987 Demo", which is a nice touch. The original release never made it to CD in 1988, so we shall start the ground running with this one!

Musically, these guys should have had more appeal than most who made it to household names, although we tend to find that a lot in this business right! For the time period, this was thrash merging into death metal, some of the tracks I find similar to Master, Possessed and even Death to a certain extent, whilst the raw thrash of the South American continent comes out on a fair few songs. 'Sadistic Sinner' and 'Incubus (Opprobrium)' are still my favourites, they have fire and passion. When the speed is restrained a slowed, the songs have much more punch and weight behind them. Faster tunes such as 'Blaspheming Prophets' lose their intensity, only very slightly, by the nature of the recording. What you have to remember is, position yourself in 1988, this was one hell of a release then, even if you try to compare to modern releases, the feeling doesn’t quite match the historic intensity. Which in fairness, mostly remains intact in this day and age. A marked level of quality in my book of the original recorded achievement.

Fans of death metal will probably already be at one with this album, for any new fans, I urge you to check this out. This is where some of the blueprints were laid down in terms of modern death metal. Opprobrium’s historical significance is ever present on this debut, even the follow up, but ‘Serpent Temptation’ is still one of those death metal releases you can really rely upon and lend your trust too as it’s still a very valid pleasurable recording bridging the gap between thrash and death. Ok, it’s got full marks, but it’s certainly worth more than 5/5 in my book! 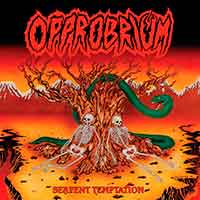