Oshiego - Woe To The Conquered

First full length release from death/thrash outfit Oshiego from Singapore. Not a band I am familiar with at all, so I was interested in seeing what they had to offer on this 8 track release coming in at just over 35 minutes in length. “Blood Omen” kicks off the proceedings and gets this release under way very nicely indeed. The band mix sort of oldish style thrash with a bit of death metal to come up with something a little bit different, very enjoyable indeed. Umar Khan gives a good account as vocalist and has a deep growly style which suits the music nicely, he is more than ably backed by the rest of the band with guitarist Kadir Alsagoff a very decent guitarist. The rhythm section of  bassist Ridhuan Syah and drummer Fauzt are a good team as well and all in all the band are very proficient at what they do. They have been going since 2004 and have released a demo and an e.p. before this their debut album, I guess I have just missed them on my radar so this is my chance to catch up on what I have missed!!

They show some really good material off on this album, with some good riffing and really tight drumming, and the guitar work is first rate with “Blood Omen” the opening track being my favourite, a beast of a track that shows the band off to their full potential. Not a bad track on the album at all and a very good cover version of “Into the Grave” by Grave as well!! They are a bit different from the usual far eastern bands, I always tend to think of bands from Singapore, Indonesia etc to be more of grind core type stuff so this was very refreshing to see that there are different types of metal bands out there. All in all a really good album from a band that hopefully will be releasing much more in the years to come. 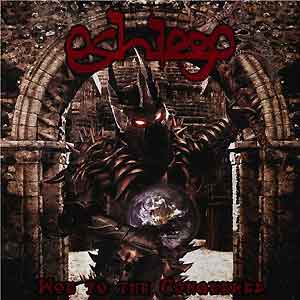