Ov Hell is a what one could call a 'supergroup duo,' meaning two of black metal's biggest starts coming together to create what they would hope is a masterpiece. Black metal fans should be excited that Dimmu Borgir's Shagrath is taking vocal duties while King of Gorgoroth handles bass and some guitar and Techloch of 1349 handles the guitar as well. Add Frost of Satyricon on the drums and it's a wet dream. So this should be one of the greatest black metal albums ever right?

The first thing to notice with Ov Hell's debut, The Underworld Regime, is that it is fast. Dimmu Borgir fans will probably shy away from this due to the lack of symphonic elements, but anyone who likes 1349 and Gorgoroth will enjoy the furious sonic assault that is given upon their ears. However, in this sonic assault, there lies a problem: production. For some reason on most of the tracks there is this extreme static crackle that sounds like the neverending flames of Hell. Atmospherically pleasing at first, but two tracks later listeners will probably beg for it to end. Why? Because it sucks all the fun out of the music. There's a lot of times when the static overtakes everything and the vocals are (barely) audible. Some tracks like "Invoker" have a bit cleaner sound, but the guitars are tuned in a sense that they still create a little bit of an annoying buzz saw sound. The drums are barely heard at all; only the cymbals it seems because its pitch is so high that it outranks the guitars. All thanks to either poor production or sheer intentional laziness of making sure everything sounded decent. There may be some out there who enjoy gritty production, but low fi production like that of Dark Throne or Dodsferd is still more audible and better layered than the way The Underworld Regime seemed to be produced.

There isn't much variation in the music between track to track; each one has the same darkly Satanic lyrics and extremely fast black metal pace that is mostly like Gorgoroth, but since King did write most of the music, it is understandable since it is his style. The vocals are ultimately the best part of Ov Hell as Shagrath can snarl in different styles, either his usual roar or having that wavering guttural cusp to it like Abbath of Immortal is so good at doing. That's about it though. There's some atmospheric elements at the beginning and end of each song of samples that could have been taking from Hell, such as people moaning in torture, unintelligible demon growls, torture wheels, and of course, that everlasting crackling fire. Again, however, musical structure is to blame as these atmospheric moments are all in the typical, expected places so it eventually becomes as mundane as the actual black metal itself.

For those who don't mind a lot of 'fuzz' in their music will probably find this perfectly find to listen to. Ov Hell's debut isn't terrible and requiring a complete make over, but it does seem to fall short of the expectations of fans for such talented musicians of the black metal scene. It would have been a lot better to hear Frost's work on the drums and have him incorporate his furious black metal abilities from 1349 on top of the more groovy work from Satyricon. If only King would have let others in over his shredding guitar from Hell... 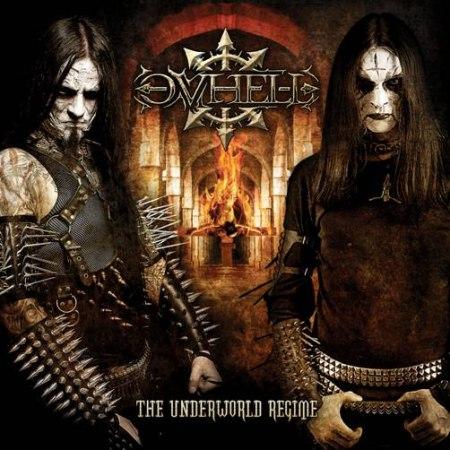