Paganizer started out as a four piece in late 1998 when Rogga and former drummer Jocke decided to start up a new band playing some old school Thrash/Death. Rogga and Jocke got in touch with some friends for guitar and bass playing (Dea and Diener) and recorded their first demo just a month later. That demo led to a deal with Malaysian label Psychic Scream Entertainment and Paganizer went on to record their debut CD "Deadbanger" which was released 1999.

The band was signed for their other albums under Forever Underground Records - "Psychic Scream" + "Promoting Total Death" and Xtreem Music - "Murder Death Kill" + "No Divine Rapture". "Scandinavian Warmachine“ was realesed under Cyclone Empire in early 2009.

Paganizer from Sweden plays a pretty fast and groovy mixture of Death/Thrash Metal. The current album doesn´t originate from the Goteburg-MelodicDeath school, the focus is more on old school American Death style with some great melodic parts.

The sound is really heavy, the balance of the instruments is in perfect harmony and the old school Grunts give the rest  for the powerful sound. This Album will not be boring, the songs have a clear structure and are well balanced. The riffs change from groovy death to melodic hymns into short blast beats, and thrashy parts. All of the tracks are interesting to listen, Paganizer did a very good job on this output.

"Scandinavin Warmachine" is recommend for all people who are sick of straight and long-winded songs. Horns up! 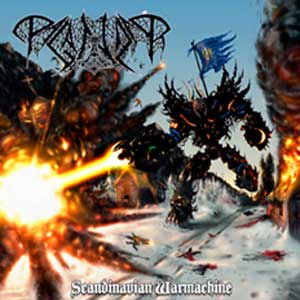