Pandemonium are from Poland and describe their music as satanic dark metal. Formed in 1989, they were called Domain between 1995 and 2004 from when they reverted back to Pandemonium.

Following on from their re-release of ‘The Ancient Catatonia’ last year, this is another re-release of the ‘Devilri’ demo from 1992 (tracks 1 to 7), the Reh/Promo demo from 1990 (tracks 8 to 11), with the remainder of the tracks coming from a live recording made in 1991 from Proxima Club, Warsaw. ‘Hagia Sophia’ (more so the ‘Devilri’ demo version) and ‘Unholy Existence’ (note the Reh Promo version is a hell of a lot rawer than the ‘Devilri’ demo version on this release for both tracks I have mentioned) have more than a touch of dark death metal about them, the sound is right for the time period they were recorded with particular emphasis on the dank production which makes this release develop a sense of character, a sinister touch all of its own. Whilst on the outside you may think this to be a black metal effort from a purely visual aspect of the releases logo and cover artwork, it is not. This is slow to mid tempo old raw gritty death metal, the sludgy nature and sparse production quality of such early material makes for a more pleasing organic release. This would sound terrible if produced nowadays, it would lose its character.

The quality of the live tracks is pretty abysmal actually and some are barely listenable, but for me to have a CD version available of the demo material more than makes up for the poor quality live recording included here as a bonus. For me the re-release is worth it alone for the ‘Devilri’ tracks as the ‘Reh Promo’ and live tracks are thin and under produced and may fall foul of some listeners desires.

Extreme music in the early 90’s was never technically perfected in their recordings compared to modern styles of extreme music, it was never about that and for this alone I really love that this has come out as a re-release. It gives long-time fans of the band a chance to make things more “digital” and also is a history lesson about the origins of heavy music released in Europe at the time, a time when everything was coming from the USA or more the traditional western parts of Europe. I certainly wasn’t aware of the underground scene from this region at the time.

Evil, gritty and inviting, ‘Devilri’ is a nice touch of darkness, a testament to days of trailblazing in extreme music that wasn’t focused on technicality, but rather more of a feel and whole package, a wall of noise in your face and a brilliant middle finger to all that was developing into commercialised mainstream. This is true underground, this is where the real deal is. 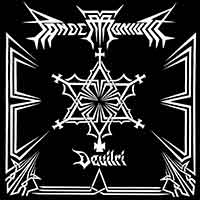