The last time I heard of a brutal death metal/death grind band coming from Hull was the now defunct but legendary, Introrectalgestation. It's worth mentioning that the pedigree of the aforementioned band was second to none displaying unreal musicianship and Parasitized are no exception. Their EP, "Existence Unveiled", is a 6 track EP which is absolutely packed to the gills with utter brutality and technicality but always maintaining a groove that the listener can bang one`s head too. The whole EP opens with a fantastic and very ominous sounding piece with hints of spanish/classical which then blends into the piercing sound of screaming then straight into the first track, "The Nausea" which is an absolutely blistering salvo of blasts, slams, guttural vocals and one of the most goddamn coolest bass sounds this side of the pond.

The production is very organic and raw which to these ears sounds amazing. I feel the guitar could been abit higher in the mix but its a minor gripe for it sure as hell does not take from the music. As I said earlier, the bass is high, real high! Which I am a huge fan of. For here in this instance the bass work is outstanding. But in some points in the songs it somewhat overpowers the song. But I have to admit I do like the sound of the bass really driving the songs throughout. The drums on this recording are an absolute treat to listen to here. They are executed with technique and finesse and really compliment whats being played on the guitars. The snare is absolutely punishing, again at times jars the senses in the mix abit but adds to the total fury of the record. The gutturals are a huge key factor in this e.p. They remind me so much of that really pronounced deep vocal much associated with New York death metal ala Frank Mullen Of Suffocation, Frank Rini of Internal Bleeding and Sherwood of Skinless fame. This guy devours his way through the songs in apocalyptic guttural tones. And fuckin hell it sounds fantastic.

Overall influences here I can hear are Origin, for the breakneck blasts and technical rips which of course are led into breakdowns ala Dying Fetus. Amongst that I hear nods further to the past to the likes of Suffocation, Morbid Angel and just a hint of Cannibal Corpse. It's a fantastic blend of technicality and quicktempo to slow chug breakdowns. These surely beckons you to head bang, it's almost irresistible.

I got to say I was pretty underwhelmed by the artwork for the EP whilst a cool drawing it definitely had more room to be developed and made more representative of what was within. But who would of thought this hellstorm of a cd lurked within. I feel that the cover art idea could have been executed alittle better. A total chaotic whirlwind of technical brutality but maintaining a fuck load of groove. Above all else brilliantly written songs which really entice the listener in. I could do nothing but bang my head to this. A promising future for these guys. If you ain't heard of em... you will soon. 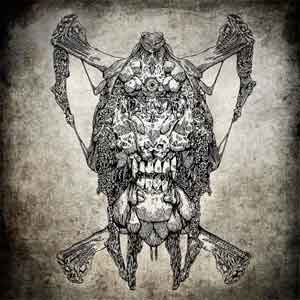 1. The Nausea
2. Existence Unveiled
3. Darkness Shall Purge
4. Beyond The Frontiers Of Pain
5. Flesh Harvest
6. Feast Of The Hyperboreans