Past The Mark - Hakhel Tribulation

Past The Mark is a new project managed by two known figures the music industry being Marc Urselli  (The M.E.M.O.R.Y. Lab / known for his 3 Grammy Awards and for his sound engineering works for titles like Eric Clapton, ZZ Top, Les Paul, Bon Jovi and last but not least Aborym666) together with Vince Pastano who collaborated with known names like Lucio Dalla, Roberto Terzani (Litfiba) and Hiroko Kouda among others.

Some of you might be already familiar with Marc's Industrial/EBM works on The M.E.M.O.R.Y. Lab, however Past The Mark's debut album 'Hakhel Tribulation' goes far beyond from his previous works. 'Hakhel Tribulation' represents a celestial-psychadelic journey that takes the listener through various passages of manipulative sounds, vibrant percussive passages, progressive guitar performances plus a wide array of synthetic textures.

Having said that, it is clearly indicative that the album is a cocktail of sounds/genres enough to say that one cannot label the musical style straight away. Holistically, the main field is electronics, however it is not enough to describe the album. The whole work is quite experimental and it clearly shows from where Marc is coming. From Synth Pop to Breakbeat, to Down-town Jazz/Funk, Ambient, Chill-out, a bit of Reggae and Funk-Rock given the outstanding guitar work performed by Vince Pastano.

At one glance, to my mind the album takes me into an imaginary world consisting of a kinda Caribbean-Bohemian down-town area populated with tribalism, peaceful synthetic melodies usually found in Chill-out music, vibrant distorted rhythmic guitar works n' melodies; and well varied experimentation of sounds acting like a full dose of vitamins (or steroids, call it whatever you want) to give a real boost straight inside the listener's inner state of mind. It is important to point out that each sound is carefully placed in the right spot to make its proper contribution within the song(s) so please rest assured as there is nothing undue!

Probably few of these tracks (or perhaps the whole album) might fit well for a film score dealing with an ethnic summer festive season.....who knows?

Although ideas are never lacking, one tiny drawback might be that the whole album lacks a bit of conciseness in the sense that the tracks can sound so distinguishable from one to another that it doesn't feel like this is the same album.  On the other hand this might be perceived as a huge plus for those who like this kind of variety - therefore it is a matter of tastes or opinion.

Intrigued? You are just one mouse-click away to get inside this celestial eerie dimension. Just pay a visit to www.pastthemark.com and stream the whole album!

You can also acquire a CD version from: www.nu-jazz.net 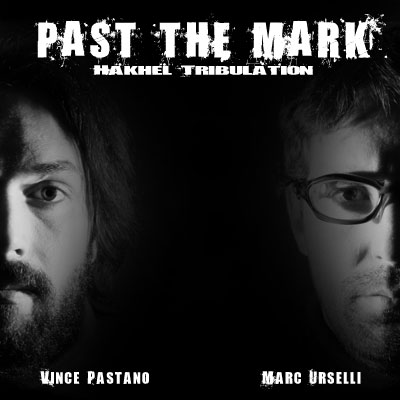