Costa Rica’s Pazuzu have unleashed a small compilation album spanning their work since 2017 and onward that consists of split albums, demos, and one live album. The result is just raw, old school death doom that sounds like a mix of very early Paradise Lost meets Dismember meets Gatecreeper. The sound just oozes with simplicity and yet it works very well. While the recording quality sounds almost live the entire way through due to the distortion and grim production, when grinding through a track like ‘Entrapment In Gloom’ one cannot help but get swallowed up by the ravenous tones, be it the droning guitars, the guttural vocals or the sludging pace, this is the kind of death doom that makes one feel like there are drowning in quicksand, but at least having a grooving head banging time with it. There is very little progressive or symphonic elements here- the music is simply chugging riffs that are catchy, plodding drums, and bellowed vocals, pretty much a sound anyone who is used to late 80s/ early 90s death metal will enjoy. As the album picks up, Pazuzu shifts more towards a faster tone, opting for more of a standard death metal approach, leaving it to the lengthy guitar solos to bring out the doomier elements, but it still hits hard despite that some of the tracks tend to sound the same after a while.

As the album progresses one can tend to tell which tracks were picked from which ‘era’ of the band’s career so far. ‘The Crawling Death…’ features a deeper raw tone that crushes with the same vibe as the earlier tracks which were mostly present on their 2018 work. But then there is ‘Ceremony of Inception,’ where the sound is very different, especially with the drums. It is lighter and quieter compared to the other tracks and the guitars are even more fuzzed out, which is ironic because this is from a later split in 2019, so it sounds like the group is regressing in their sound, but perhaps that is on purpose to showcase their ‘old school’ features. The closing live rendition of their Nihilist cover ‘Carnal Leftovers’ features a very muddled sound, save for the vocals which come through clearly, but everything else feels buried. Very old school, very raw, and certainly proving that these guys can sound as good in the studio as they do live.

For fans of more modern death metal, Pazuzu may not be for them. This is more your underground, hole in the wall playing band that keeps things simple and loud. They may never achieve stadium worthy status, but certainly can earn a cult following for their raw, no holds barred presence in the metal world. To obtain this album is a little niche because a lot of the group’s work has only been released on cassette so far, trying to stay true to the old school vibe. "Oath Of Unholy Sacrilege" is not for the faint of ears, but those who like death metal dirty with a bit of groove will certainly enjoy it. 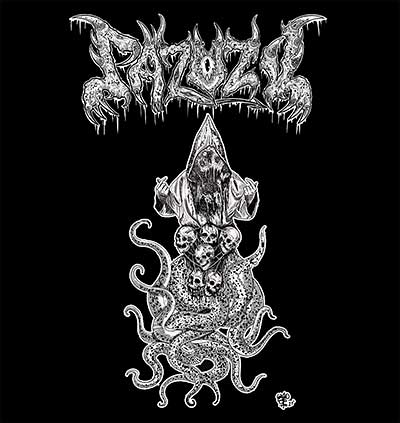 1. Entrapment In Gloom
2. Calamity And Death
3. Inhale… Of Sins
4. The Crawling Death Of Christendom And Abominations
5. Ceremony Of Inception (Part I)
6. Carnal Leftovers (cover Nihilist) (Live)