The Intro to Pencil Lead Syringe’s new CD Suffocated and Embalmed ,is very coincidentally entitled “Intro” and it is a grand one. It opens this collection of sick sick death grind tracks the best way I have heard. There is a quiet ambient industrial background while beeps that sound like electronic on/off switches alternate amidst a soft layer of screaming coming from somewhere else. The second track, “Redrum Is Murder Backwards” blasts into proper metal mode with awesome guitars, brutal pounding skins, and vocals that sound like a tightly constricted flame. But of course, this flame sounds liquid and squirting. The singer’s contempt for humanity, and maybe perhaps even himself, is evident because nobody sings like this out of love. The only love is for the music itself and the destructive rhetoric it holds and enacts.
The fifth track of the CD is called “Good Stuff Happens.” One has to doubt whether this is really a song of joy because even though about a minute into the track the song slows down into a strange bouncy drum segment, the guitars proceed to speed up into deliberate straight and consistently executed motifs that sound like the music equivalent of razor sharp steel girders designed to fall upon one by one in the fall. And all the while, the vocalist delivers the most deep throat guttural sounds.

Of course, the track titles are strange. Some examples are: “The Agua Mansa Massacre,” “A Night In Terror Tower,” and “Boydsters Back In Town.” I don’t know what it is but some of the grossest music and heaviest playing comes from bands who have the lamest song titles. Now, I assume that Pencil Lead Syringe takes pride in its track titles, especially since the name of the CD is Suffocated and Embalmed. This is the effort of a real metal band, a band with quality skills in very area of brutal death grind. 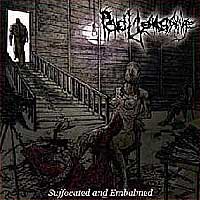 1. Intro
2. Redrum is Murder backwards
3. The Agua Mansa Massacre
4. A Night In Terror Tower
5. Good Stuff happens
6. Piano Lessons Can be Murder
7. Boydsters Back In Town
8. The Silence Of...
9. Widchimes and Happy Times
10. Ugly Bitches Love the Drugs and Money
11. Buy Me Bone Storm or Go to Hell
12. Beware of a Hitch Hiking Ghost