Permafrost are blackened doom metal from the US (Alexandra, Virgina). Being in existence since 2009 "Transitory" is their first recorded offering which only presents to us 3 humble tracks. Not sure if it took this long to spew out these 3 tracks or if these guys are really that busy with no time to create or record hmm maybe they wish to use "Transitory" as a trial and see how it flows into the world of darkened metal before offering anything more to the sacrificial altar.

All and all "Transitory" is not a bad album. Even with only 3 tracks each holds a good length and vibe to them. Very low toned but the production is not muffed nor is the sound boring. I really like the gut spawned vocals and the consistency of the rhymes. The drum work here is very traditional blackened doom style which is perfectly nice for this genre however the drummer does throw in a blast beat here and there which gives an element of surprise within the beat.

The atmosphere throughout these 3 tracks is very thick and heavy, extremely emotional hitting that emo level of melancholy and despair. This album is primitive and with the 2nd track almost borders on funeral doom but then the slight upbeat lift halfway through sort of takes it away from that bringing it back to black. I like this album but find it's weak point would be the attempt at cleaner clearer vocals as found within areas of it's tracks. I feel that either a stronger clear vocal sound or even a female voice would be more fitting for those parts but that is just my opinion.

I find the production or recording to be a little raw but this is how I feel it is meant to be. I give Permafrost and their debut album "Transitory" a 3/5 star rating. Check this out and prepare for a dark suffocating emotional experience. 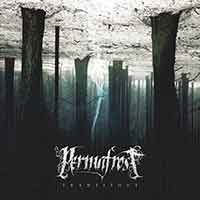