Pure Evil grants listeners the third chapter of the one and only Kryth's Satanic legacy. Many become skeptical at how well one man can perform his instruments, but it's obvious that Kryth has no problem painting a demonic picture with his music. The very first thing fans will notice is the guitar work and vocals; they sound an awful lot like Vital Remains's early work, minus the keyboards. Perhaps a huge influence on this Finnish band, but if listeners are familiar with Vital Remains, then they should know what to expect from Pure Evil. Many of the tracks are mid paced chuggers with an emphasis on how evil the vocals can sound in between a deep growl and mid pitched scream. They're usually layered, but each is at a tone that complements the other without trying to overtake it or create too big of a contrast. The guitars are pretty well done; they sound a little dirty and doom influenced at times such as on the track "Kohtalo," but aren't a monotonous pace. The drums, sadly, can be a real pain to listen to as they sound more like a chugging freight train than actual sticks hitting away on the kit. It's either atmospherically interesting or sounds like a CD stuck in mid-spin and playing the same two notes over and over.

Chapter III has some good atmospheric touches to it as well. "Black Flame" has a very ominous introduction that goes on for a minute before the music sets a slow, almost funeral doom metal pace that is perfectly fitting for the music. A lot of the tracks have close to a minute long introductions similar like this, but the music itself is usually very fast paced and brutal. But, there's other times when the atmospheric parts just sound downright blasphemous. "Soulless" is a crackling mess that just sounds like static with very little redemption at all, making it a track that probably should have been thrown out altogether. The introductory track is similar, but that's appropriate as most introductory tracks are hit-or-miss. If such a track is in the middle of the album and it misses, it can really ruin the mood.

Pure Evil also ends up granting some homage by covering a Hypocrisy track. It does a good justice of keeping up with the death metal standard, only adding a more gritty, darker feeling to Sweden's already melodic masterpiece. The best part of this song is perhaps that the drums can actually be heard in their pounding glory, and not just buried behind all the other music. The guitars are a little more fuzzy, but this just adds to the dirty lo fi production without taking away from the song itself or making it so unbearably static laden like "Soulless" was. Listeners even get to hear Kryth do a solo, which he isn't too shabby at either. It is a shame he doesn't do it more often.

Fans of death or fast death doom metal will probably enjoy Pure Evil. It's a little on the gritty side and obviously isn't as polished as it could have been with more members in the band, but it is still pretty impressive to see that Kryth does everything. Chapter III an dark piece of work that is atmospherically rich and suitable for the depths of Hell. If Kryth is indeed following the Dante's Inferno formula, fans should expect the music to get even darker and more haunting as they are descended even further into the depths of what may be a Chapter IV. 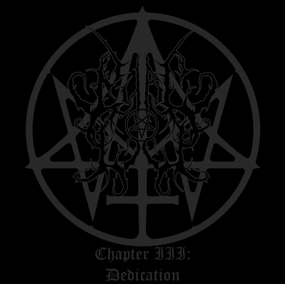