Another unsigned UK thrash band I've had the pleasure to share the stage with a few times, Wakefield's Quake have been going for a couple of years now and their live shows are a sight to behold. They're nothing out of the ordinary, but bloody hell they don't half go for it! So after rubbing shoulders for a few years, the time came for the lads to put on their big boy trousers and release their first studio effort, "Subsisto Novus Ordos Seclorum". And with great trepidation, they sent it to me asking for a review, so...

"Subsisto Novus Ordo Seclorum", presumably titled such because "Pretentious Albumus Titlo Suckorum" wasn't very subtle, gets a big fat red mark before even one note has been played for being promoted as an EP, when it's nearly 40 minutes long and spans seven tracks. That's not an EP, gentlemen, that's a bloody album; just because it has less than eight tracks doesn't make it an EP. Prime examples of such being "The Force", "Rotting", "Slow Deep & Hard", and "Unto The Locust" - all of which are seven tracks long, and still full albums due to their length. This obviously means that these seven tracks are rather long in nature, with the shortest being four minutes and the longest one hitting just over eight... and the latter is the opening track of the album. Opening an album/EP with an eight minute plus track is a ballsy move for even the most well reknowned acts in the industry, let alone a bunch of thrash metal upstarts from Wakefield, so "SNOS" (fuck typing that full title every time) pulls a rather offputting face at you before you've even hit the play button on your media library, much in the same way as a cheeky and defiant toddler would when told to go to bed. If you're buying this and expecting a nice short thrash punch as a taster of things to come, then you're going to be sorely disappointed.

Musically, Quake exhibit your typical Slayer-Exodus-Sepultura-Testament variety of thrash metal that keeps it fast, aggressive and consistent from start to finish for the most part. It's extremely familiar territory, particularly on reckless Intensity and Kill Fight & Survive which reek of Slayer through and through, but the execution is sincere and paced well enough for it remain mostly enjoyable. The vocals are fitting for the style presented, but they're probably my main complaint about "SNOS" aside from the silly length; not that they're outright bad, but they're completely flat. Gianni has some decent pipes to him, but he never wavers into higher or lower growls of any sort and it adds an air of monotony to the proceedings which wouldn't have felt so pronounced otherwise - again, he's not a BAD vocalist, but a bit of variety would've nixed this issue completely. Combine this with the album's complete lack of brevity and you have a recipe for what could only be described as a complete and utter fucking disaster. So what do I think of the album (fuck you, it's NOT an EP) overall?

I actually quite enjoy it.

Though "SNOS" is begging for some vocal variety, shorter tracks and tempo changes, the songs aren't quite the complete clusterfucks that I was expecting them to be; the title track, though perhaps not the best choice to open the record with, manages to keep itself interesting which is a pretty bloody difficult thing to handle when you're dealing with eight minutes of thrash metal. It's apparent that Quake have made a conscious effort to stay true to their influences, yet make attempts to do something a little different in places, and I can applaud a mindset like that when it's pulled off nicely. By no means have they hit the nail on the head, but the foundations for something impressive can be found here if you listen carefully enough and, with a bit of careful scrutiny, they could make their next studio work a frankly incredible release.

So to put it bluntly, "Subsisto Novus Ordos Seclorum" has a lot of flaws that's prevented it from getting full marks, but I refuse to let it walk out of here without a recommendation, a pat on the head and a party bag to take home with it. If you can stand it's length and some decent-but-monotonous vocals, it's a rewarding listen that has some real talent hidden beneath the initial layers of die-hard thrash and pretentious album titles. Just don't view it as an EP, and you can consider this a solid 4/5 release. 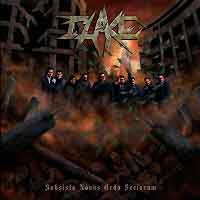