Quartz’s history pre dates the NWOBHM movement, although they will be forever labelled as being part of it in modern times. There’s a couple of distinct periods of this bands past recording discography, a more commercial sound and a more early Sabbath inspired era. This album, their first since re-activating and their first since 1983 sees them taking on bother periods with a strong emphasis for me of capturing all era’s of the Sabbath arsenal from Ozzy to Dio to Martin eras in terms of vocalists. The style and delivery of the vocals also seems to change throughout the release which is a little touch of inconsistency for me.

The first couple of tracks, the title track and ‘Rock Bottom’ (not UFO but actually sounds similar I might add!) are standard metal tracks that featured in many NWOBHM playlists.  Quite melodic and laden with some sweet vocal lines that you can effortlessly sing along too. The more sinister sounds come from ‘The Stalker’ onwards. From then on, and in particular ‘Zombie Holocaust’, the mystique that Quartz are known for comes out to play and can at some point even terrify you if you have the album balanced right on your stereo.

‘Walking on Holy Water’ is rather epic and expansive, I tailor my comparisons to Tony Martin era Sabbath, and the vocal lines have the emotion and story nailed. Then wait for the dehumanizing chugging riffs later in the track. ‘Riot in the City’ is a touch bouncier, quite melodic and much more accessible. The closing ‘Scream at the Devil’ lyrically goes more sinister but feels like 70’s Kiss hybrid with Slade’s ‘Radio Wall of Sound’ with Jim Lea styled vocals, the devil is indeed back and dressed in black quoting a lyric form the track!

Quartz fans will enjoy this, I do, but for me it’s a little too varied over the course of a full album, as if all the styles and phases are merged into one. That’s a good compilation but I still can’t deny it’s a good album, but it’s not going to be for everyone, oh yeah and there’s some keyboards here and there! 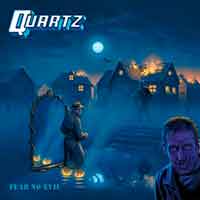