Yeah, I think it's real nice Quiet Riot are back. Back in the early 80's QR were selling ersatz insanity and resurrecting old Slade tunes. Now in 2007 they are selling modern maturity and sober living. The lyrics to the new tunes on "Rehab" deal with some heavy life lessons from being burned in relationships, excessive partying, the corruption of the music biz, yada-yada-yada -- but the bottom line is that the music is pretty damn good. They've got some fat-ass guitar riffs, some excellent bass tones and well-constructed songs and only one cover on this one, that being the Spooky Tooth song, "Evil Woman."

"Rehab" is mostly hard rockin' tunes, not too heavy, nothing too fast, but overall I have to admit this is an album that is hard to characterize in a nutshell as there is a lot of variety. For example a couple of the songs sound like they could have been included on either of the Van Halen albums from the 80's that have Sammy Hagar as the vocalist (which is no surprise as they were contemporaries of QR), and the last two tracks sound absolutely Zeppelin-ish, while "Old Habits Die Hard" has a gospel-blues feel to it complete with choir and organ. Other stand-out tunes are the first track "Free," which is rather a 70's hard rock sound and "Blind Faith" which is more of a ballad.

Again, one of the more impressive things about this album is the guitar work of session guitarist Neil Citron, with very intricately constructed riffs and clever leads in just the right places, varying nicely between melody and shred. The basslines are great, the drum-work is for the most part solid and some of the fills are downright brilliant.

Kevin DuBrow's vox still resemble the shrieking of a pterodactyl in heat but it all goes down smoothly enough with generous portions of studio reverb effects and what-not, and the production values on this recording by the way are excellent. There's nothing too fancy, and it's all mostly simple, and again the instrument tones are fantastic.

A few of the lyrics are a bit -- err -- outlandish -- for example on "Beggars and Thieves," I had to laugh at this one:
"Overwhelmed with emotion, the tea has been brewed Indiscreet and abandoned, I guess I'm pretty well screwed." 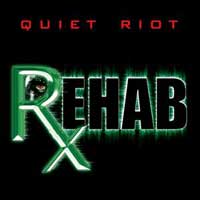