Ragnarok - Collectors Of The King

2010’s Collectors of The King endures where 2004’s Blackdoor Miracle ended with the exception of a slight lineup change. The vocalist Hoest has been replaced by Hansfryste. They have similar very similar vocal styles but Hansfryste has a deeper howl. This album sounds akin to a more technically developed Darkthrone (especially the drumming) with a much warmer production. It has been a long established practice within the Black Metal scene to have the coldest, most raw production you can find; Ragnarok not only rejects this notion, they spit upon it!

Collectors of The King starts off with a track entitled Resurrection; it is a fifty-five second long introduction clip. It features a patriarch of the church performing an exorcism; as the interlude concludes the religious figure yells “I command thee Lucifer, quit this place!” and the demon devours him. It adds a very suggestive ambience of the horrors to come on the following tracks.

The song after the interlude is Stabbed By The Horns; it opens with a blast-beat and an extraordinarily ominous riffing which Ragnarok has mastered. The double bass in this track is consistent, and the tempo never ceases. It’s a relentless assault upon the listener

Burning The Earth seems to pay homage to their Norwegian predecessors Immortal. Ragnarok goes about this with the utmost elegance; the composition is admirable and the end-result is both valiant and glorious!

In Hounour of Satan features terror abound! It starts off with tremolo picking and a blast beat in the typical fashion of Black Metal, but the drummer masterfully changes into a very fluid, a very rolling type of beat. This song features an interlude which utilizes their amps’ clean channel, which adds a relatively moribund atmosphere. The part leaves the listener gasping for air, only to be thrown back into the fray of a diabolic war.

The title track Collectors of The King is very reminiscent of the title track on their previous release Blackdoor Miracle. It starts out with a sinister single note melody with added drum fills, then the drummer picks up the tempo and they advance into a merciless blast beat and tremolo warfare. This song is very standard Ragnarok and displays the essence of their intent!

In Eternal Damnation the initial progression in both the drums and guitar mirror Kneel (a song from their 2004 release) almost exactly. The main difference is a more busy guitar part, but the similarities soon divaricate as Eternal Damnation becomes a wild and untamable beast in and of its own right!

The Ancient Crown of Glory perfectly demonstrate how Brigge (guitars) and Jontho (drums) write off of each other so remarkably! This song is relatively standard Ragnarok, they don’t throw you any curveballs. Which isn’t a bad thing, you know exactly what to expect: primitive black metal with unorthodox chord formations.

May Madness Hunt You Down revisits the introduction where the nefarious triumphs the sacrosanct! This track is mid-tempo and maintains a sinister ambience throughout. It exits with an echo of Hansfryste’s sinister vocals. The song is good, but it blends itself in with the other tracks and does not stand out.

The last track Ragnarok presents us with is entitled Wisdom of Perfection. It starts off with feedback and evolves into a very conjunct and dissonant chord progression. Hansfryst continues to impress with his eerie whispers and laments; when the song picks up we are immediately addressed by horrific scream. The song is very inconsistent with pace which is very uncharacteristic of the album, but it is a much welcomed change. As this ravenous onslaught commenced with feedback, it also leaves with feedback.

Collectors of The King is a very solid follow-up to Blackdoor Miracle, however it isn’t an essential release by any means. Fans of the band will not be disappointed, but it may take a few listens to become accustomed to Hansfryst and his brand of vocals. 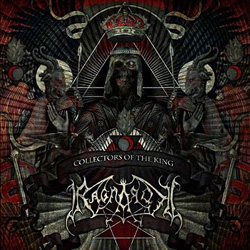