I’ll be honest I’m new to this band so where this fits in the band’s catalogue I’m not sure but I’ve not seen any rejections and it seems at least on par with past releases, I’ll be reviewing this album on its own merit.

This is the eighth album by Ragnarok and one with a line up shake up, drummer and sole original member Jontho has swapped the drum kit for the microphone and does an amazing job spitting bile all over this album. Black metal is the most diverse of metal subgenres but “Psychopathology” is a straight up a thousand miles per hour soundtrack to the apocalypse, the drums are like a hail storm that doesn’t let up all the way through the album. Much in the vein of 1349, Murduk or Gorgoroth. The production is very clean which will upset some purists but whatever, there’s subtle bits of melody sprinkled in here and there like on 'Lies' or 'Where Dreams Come To Die' for example but it just adds more darkness and atmosphere, one thing I will say a common thing with black metal is people say it feels cold, it’s the soundtrack to the eternal winter…not this! This feels like standing on the inside of a volcano. The amazing artwork looks like hell and this album feels like hell, it’s brutal and storms through the speakers; it has an oppressive, chaotic claustrophobia.  Its black metal, don’t get me wrong but this has as much in common with Hate Eternal as much as the previously mentioned bands.

It sounds like the album cover looks horrific in the most beautiful way. A stunning piece of brutality. 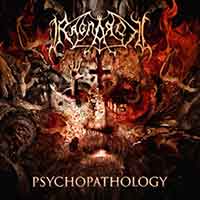