I have always loved demos eversince the cassette tape era. Tape trading was my personal teacher for finding new music. The dubbed cassette tapes from friends' records or other cassette tapes (sometimes dubbed) may lowered the sound, but increased my agony to discover new music. The shitty radio show recordings I was trying to make avoiding the commercials and speaking of the show host are now a distant memory. Rewinding cassette tapes with a pen to save battery energy sounds weird now, but it used to be the only option to save your pocket money. All these cassette tape connected stories have been a huge part of my early metal quest, thus demos have always been (and still remain) on of my favorite parts of the underground.

Times they are-a-changing as Bob Dylan wisely said in his classic record of the same name in 1964. Demos from cassette tapes soon turned to CDr, which later gave way to digital releases. No matter the format, demos are still a raw, powerful artistic means of expression. An artist/band decide to express themselves through music and try to make it public. That's what it's all about.

Hailing from the States Rancorous are a power trio made up of Joe Downey- Drums, Frank Morris- Bass Guitar and John Heidenreich- Guitar/Vocals. They play a savage and full of rage deaththrash. "Stealth Dominion" is their second demo. "Into the Nuclear Fire" was released in 2018 and had preceded it. In "Stealth Dominion" Rancorous deliver a raging 9 minute attack demo that will put your back against the wall if you like classic thrash, death/thrash and the raw/punk attitude of Motörhead. The riffage is cataclysmic. The songwriting is very nice and effective. I can imagine huge pits in their shows!
Rancorous take the healthier thrash elements from bands likes Nuclear Assault, (old) Slayer, (old) Exodus, Sacred Reich, add some Napalm Death and giving it a sexy Motörhead twist in the vocals they achieve an excellent result.

Their ideas are good and they complete and execute them this time in a 4 track nuclear bomb! The song titles are: 'Stealth Dominion', 'Cold Revenge', 'Prime Sacrelige', 'Revelator' with most of them being around 2 minutes long. The production is very good and sharp for a demo. Not polished at all, but at the same time clear enough. Rancorous decided to release the demo on pro-cassette tape and it looks as if it was released back in the late 80's-early 90's.

"Stealth Dominion" was recorded at Lower Hell Studio, April 2018/July 2018, and mixed by Heathenrealm February 2019. It can still be found in their Bandcamp along with their first demo. The band is still unsigned so labels try give 'em a listen. In one word this demo is vagrancy! 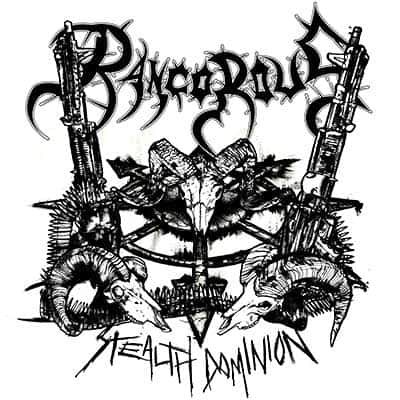