While the term "Rat King" has folkloric associations and many resonances within folklore, the phenomenon of tail-tangled rats is quite real. Rat kings involve a number of rats intertwined at their tails, which become stuck together with, for instance, blood, dirt, ice, horse-hair, or faeces or simply knotted. The animals reputedly grow together while joined at the tails. The numbers of rats joined together can vary, but rat kings formed naturally from a large number of rats occur more rarely. The phenomenon is particularly associated with Germany, which may have produced the majority of reported instances. Historically, various superstitions surround rat kings, and they were often seen as a bad omen, particularly associated with plagues!

The super sludge/stoner trio Rat King have merged with thrashers Warhead to create a highly charged split 7” that is due for release in early May. I was wondering when I would hear from the superb “Rat King” from Seattle again and thank goodness it hasn’t been too long, although long enough! Seeing this band live in their hometown of Seattle at the amazing High Line venue last year was truly amazing to say the very least. The band has the knack of producing deep unwavering sounds that hold not one single lyric and still manage to keep an audience gripped – it’s all in the large chunks of reverberating rhythms that are riveting and truly stunning!

“Considering there are no vocals of any kind Rat King can seriously focus on what makes them stand out from the rest and that is their unique blend of sound that delivers a blow to the jugular!”

The carnivorous flanks of metal are stacked with an urgent intensity that creates ripples of unending intrigue through your brain and certainly just impossible to ignore. Bridgeburner plays host to savage beats and a tempest of wholesome rhythmic swathes that bite into a creative flexible structure and in printing with boisterous tones. It really transports me back to Seattle in an instant where I stood for most of the band’s set, open mouthed along with the rest of the awe struck crowd, at the colossal tempest that the guys Tyler, Daniel and Ricardo had created.

This track is no exception, it bulges with the potency of enthralling passions and rampageous impressiveness, harvesting a deep ravine of monstrous sounds that opens up and broods with intensive riffing and a towering inferno of rabid beats. Does this mean an album is in the pipeline? I really hope so! Rat King are as dramatic as they are addictive on record but equally so as a live act.

Beginning as a fledgling Thrash Metal outfit from Chandler, Arizona, Warhead has evolved into one of the most dynamic, versatile, and explosive bands in the Valley’s metal scene!”

Kicking up a thrashing storm Warhead set the pace with this obnoxious riff infested convulsion of chaos!

The punchy tumultuous onslaught is captured on this anthemic recording. The thick muscular rhythms are concentrated on producing screaming guitar riffs, crazed bass, powerful beats and unusually raw vocal exploits. The harmonies the band have produced are simply launched into the mix with extreme passion.

“This thickset sound is typically thrash, but none the less leaves its mark with cleverly addictive lyrics and a really chunky delivery that seizes control and keeps it up right until the end of the track!”

The fact that these two bands are totally the opposite ends of the scale, they have both managed to rack up an intensive split 7” between them that will give the listener plenty to focus on and engage in! 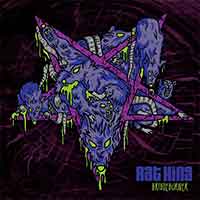